About a dozen of us left Walton Day Centre.

We headed left at the main road towards Molesey. Onto Hampton Court and Bushy Park. We enjoyed lunch at Tied End Cottage in Teddington.

We took the river route back and Steph, Liz, Bernard and myself stopped for drinks and cake at Ewell Court Park.

The weather stayed dry and it was a good ride.

We stuck exactly to the script as promised on the blog except I blotted my copy book by almost arriving late (don’t ask) and then having hardly started I fell off my bike very slowly (new shoes, new cleats, old pedals, old bike). The barbed wire fortunately came off worst!


After leaving Dorking we took the off-road cycle route to White Down Lane and then up to Abinger Common, around Leith Hill before swooping down Tanhurst Lane to Forest Green and the long route to the Bull's Head at Ewhurst via Walliswood and Ellen’s Green - some 18 miles.


Ian joined the 8 of us for lunch having come by the direct route. Food was served promptly. Such rain as there was came and went while we were eating.


After lunch we made our way to Cranleigh, joined the Down’s Link to Shalford and Guildford and then it was tea for 4 of us at West Horsley GC – another 18 miles.


Many thanks to Terry for being TEC and providing the photos, to the corner markers and to those who dusted me down! 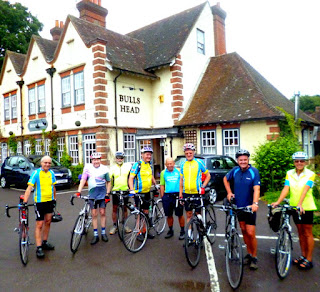 After following Peter's route to Ewhurst (see earlier blog), including a demonstration of how to survive unharmed an altercation with barbed wire we enjoyed lunch at The Bulls Head. 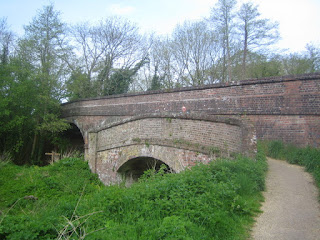 A picture I took earlier

Whilst riding along the Downs Link we passed this complex bridge at Tannery Lane. It takes the road over the Wey and Arun canal, the Guildford to Horsham railway line and incorporates a towpath crossing.

Some of us had tea at West Horsley.

Thanks for the ride, Peter. 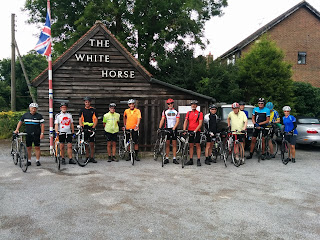 In spite of the somewhat uncertain forecast 16 of us assembled at Dorking though Dave B(?) was only coming a short way. A beeline south through Rusper got us to Horsham though without Ged who had punctured twice and Mark who stayed as guide when the 2nd one struck. We looped to the west of Horsham centre to emerge close to Tower Hill, then past the Bax Castle and up Bonfire Hill to Southwater. Here we took the Downs Link to Copsale and then it was just a short ride to the White Horse at Maplehurst - a Free House with good beer and filling food at very reasonable prices. Here we found Ged and Mark who had come more directly from Horsham.

After lunch we continued to Newells Lane and Lower Beeding where a left turn along Church Road took us to the Hammer Pond and the long gentle rise of Grouse Road to Colgate. From here we were back on familiar territory through Faygate to Lambs Green, bypassing Rusper along Orltons Lane and then the long runs of Partridge Lane and Broad Lane. We cut across to Punchbowl Lane and had tea at Denbies. 45 Miles from Dorking.

I'm replacing Geoff G this week as leader. About 22 miles to the White Horse at Maplehurst. About half a mile of off-road, hard surfaced and mostly quite a comfortable ride on 25's. The deepest gravel and potholes encountered were "on" road. Tea probably Denbies but maybe Strood Green if numbers are modest.
Posted by Brian at 15:46 No comments:

After leaving Dorking we're taking the cycle route to White Down Lane and then via Abinger Common, Tanhurst Lane and Forest Green to the Bull's Head at Ewhurst.
After lunch it's Cranleigh, Wonersh, Shalford (using the Down's Link) and Guildford for tea at West Horsely.
About 36 miles altogether so please ready to leave at 11a.m. sharp!

Cash exchange in London preferred BUT no doubt an alternative arrangement can be worked out.

Ten Bs left the Yvonne Arnaud fairly promptly (despite Great Western Railway's best efforts) and headed southish with a not very promising outlook. However the sun came out and we were soon enjoying an English summer's day. Briefly using the track we soon crossed the A281 into Shalford Lane. Using lanes as far as possible we soon crossed the river Wey and spent a few wonderful minutes riding along the towpath to Farncombe Boathouse where we rejoined the road to Godalming outskirts. After a long reasonable climb up Brighton Road we turned into The Drive and soon to the steep downhill to Tuesley and Enton Green. Another gradual uphill on a narrow shady lane with a stream at the roadside. Bliss ! Soon we met the A283 where we headed north to The White Hart at Witley where well priced, good food was soon being served and almost Birthday Boy Ian bought the drinks.Thanks Ian.

Another long, gradual climb straight after lunch followed, again on well shaded lanes with spectacular tree roots on display above us. The ride was uneventful to Bowlhead Green where I had a rear puncture. Unfortunately Ed wasn't available but a PLRC (Puncture Location and Repair Committee) was soon formed and in no time at all we were under way again. Thanks all. Soon we crossed the A3 (couldn't quite see the tunnel) and pressed on through Thursley, Elstead and Hurtmore to  Hector on The Wey for 3s at 4. Suitably refreshed we left some time later.

What a pleasant almost traffic free summer's day in unfamiliar country with very good company. Thanks all, especially tec Tim and corner markers. 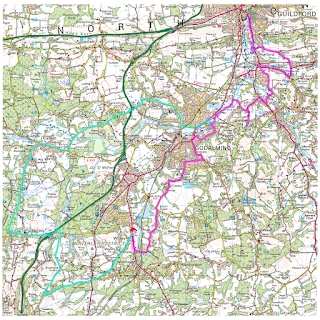 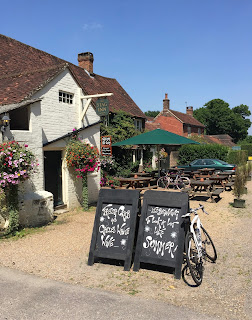 Eleven of us left the Yvonne Arnaud Theatre at 1100 sharp; John had phoned his apologies due to a failed washing machine which required urgent attention.  Grey skies at first, and an air of doubt in the peloton - should I have brought my rain cape?  But all was well, the sun returned and we bowled along through some fine countryside, with the temperature steadily climbing, reaching the point at Loxhill where the tar on the road had melted.  We thought it had probably happened in yesterday's heat, but it was still quite a mess.

Not a hilly day, but Breakneck Hill promised some entertainment, though, in the event, the A Group is so hardened by the Surrey Hills that it was quite difficult to know which hill was Breakneck.  No-one seemed to mind, and we arrived good and early at the Stag, a very nice pub where we ate well in the sunny garden. 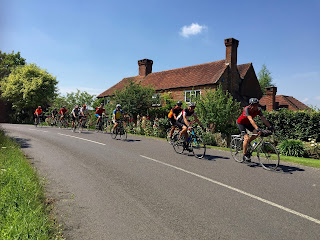 Back on the road after lunch and the temperature hovered around 30C for the rest of the afternoon, comfortable enough while riding, but very noticeable if you stopped.  Near Loxwood we lost Mike - despite the protestations of the corner marker he was obviously in the zone and flew past the turning. Steve spoke to him on the phone and he elected to carry on the way he was pointing, which seemed fair enough.

Onwards through more familiar lanes to Walliswood, where Steve and Dave left to take a direct route home over White Down; the rest of us went steadily to Newdigate where we enjoyed ice-creams.  Janice left here, to begin her journey home.

Over to Pixham and tea at Pilgrim Cycles - a shady table outside, but still very warm.  No-one was complaining. 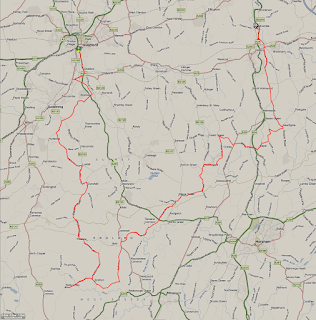 My thanks to Neil, the indefatigable back marker, to all of the corner markers for their help, and to all of the group for their company.  We had a proper Summer's day out.

Please read if you wish to attend Frank's funeral.

The Funeral is going to be held at 11.15am on Monday 25th July at Breakspear Crematorium, Breakspear Road, Ruislip, Middlesex, HA4 7SJ.  The cortège will be traveling to the crematorium from Frank’s home in Greenford, Middx. The family and club would like Frank’s fellow cycling friends to ride with them (about 10 miles at 15 mph). This requires police agreement and escort, which has already been arranged.

Due to the number of cycling clubs and other friends that knew Frank, we are working together with his family to plan Frank’s funeral ride, and have little time to provide the number of riders to the police, and also numbers attending the service and wake to Frank’s family.

Cycling friends who will not be joining the cycle are, of course, very welcome to attend the service and the wake.

Can we ask you to please circulate this through your club and collate responses, by no later than Wednesday 20th July at 7pm.  This is required for the family to fully plan for this event and must be sent to us by the above date and time.

Please confirm if you and other club members will be attending, the ride, the funeral service (making your own way there) and the wake afterwards by clicking on the following link. Please only use this link if you have not notified your club contact.

The Ride details, timings and route will be published towards the end of the week on the new Kingston Phoenix RC website, which can be opened here: http://www.kprc.org.uk/. These details will only be published once we have final confirmation from the Police and Funeral Directors, with an agreed route and timings.

The Wake, if you will be in attendance, will be at The Barn Hotel, West End Road, Ruislip, HA4 6JB.

The family have requested no flowers. Donations can be made although these may go to more than one charity. At the time of sending this email we do not know how donations are to be made. We will put up relevant information as we get it, on our new website.

Added by Lisa: I have been told that there might also be an option for joining the ride closer to the crematorium for anyone daunted by the idea of 10 miles at 15mph. Keep watching the Phoenix website for details.
Posted by Lisa at 12:06 No comments:

Train assisted ride starting at Guildford on Wednesday - heading out West.  Elevenses at the Yvonne Arnaud cafe, lunch at the Stag Inn, Balls Cross, and tea at Pilgrim's or Denbies, to choice.

51 miles elevenses to tea, no big hills, though I did think that Breakneck Hill would be worth a look.  Sunny day forecast, so we should be able to get along at a fair pace.


We have now heard from Frank’s daughter Susan about the arrangements for his funeral which will be on Monday 25 July in Ruislip. As there will be many of us who will want to attend it would be helpful if you could let me know if you are intending to be there, either by e-mail (d.vine207@btinternet.com) or face to face on Wednesday.

Please see the full details in Susan’s note below.


A ride of two halves today. A relaxed morning with only a slight headwind, Tite Hill and a short shower in Windsor Great Park to challenge us. We were 18 at lunch outside the Dew Drop Inn hidden in the hills south of Hurley, served cheerfully and remarkably speedily.

After lunch conditions became more testing - two punctures - a small group of riders vanishing inexplicably in the twilight zone between Bray and Dorney, evading a search and rescue organised by Ged, but thankfully reappearing from an unexpected direction a few minutes later. Further on, when riding through extensive floodwater around Datchet and Wraysbury we realised that the delays had fortuitously prevented us from being caught in the downpour. Arriving in Shepperton around 5.30, we were too late for tea, though still 12 in number, after a few had peeled off for more direct ways home.

Thanks to Colin and Geoff for back marking in far-from-ideal conditions, and to everyone who corner marked and otherwise supported us in keeping together. 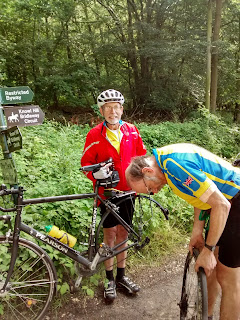 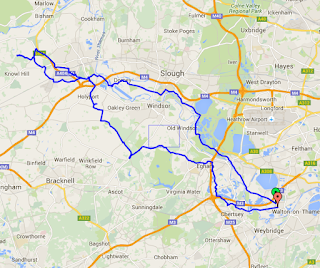