Yesterday was Wednesday and time for a bike ride.

Shall I go to New Haw like it says on my calendar?  No, I've left it a bit late to leave home, and they will have left before I get there. Shall I go for a long ride into the countryside?  No, the weather forecast isn't brilliant.  Let's keep it short and local. So I reached a similar conclusion to Simon, in his blog post earlier today, and headed for the Wimbledon hills for a bit of interval training. 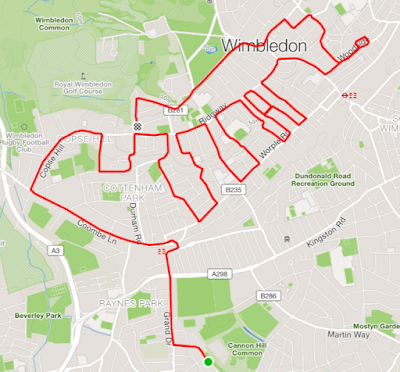 A couple of miles of flat roads to warm up the legs and then into the hills. Gently up Copse Hill to start with and then into the tougher stuff. After half a dozen ascents I was freewheeling down Wimbledon Hill Road and needing to make a decision. Do I turn right and repeat the hills in the other direction, like quite a few other hardcore Sou'westers do? Or do I turn left and hope to find a friend in his front garden for a socially-distanced recovery chat? Of course I turned left, but he wasn't in his garden so I had to cycle on, up to Wimbledon Village and along the side of the common to the final hill.


I had left this one until last as I think it is the steepest of the lot. Here is a photo from Streetview, but we all know photos never do the steepness justice. (But it does have bonus Wisteria for Mike Morley) 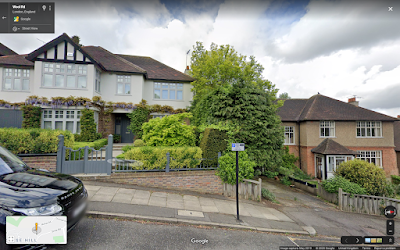 I gave it all the energy I had left, knowing I could stop and recover at the top.

Some time later I gently rolled down to Raynes Park and back home to continue my busy life of doing very little.
Posted by Neil C at 23:11 1 comment:

I mentioned before that the only hill near me is Richmond hill, a fairly modest 35-45m climb depending on what you include.   I've done a few laps a few times recently, just to get some hills in: it doesn't take long to do 300m of climbing, and then you can go off and do something enjoyable for the rest of the ride.

Then I read this article about cycling training. I often read them, and never take the advice.   But this time I realised that their recommendation for interval training is not too far removed from the Richmond Hill circuit.  4 to 6 hard efforts lasting 30 secs to 2 mins, followed by easy riding for twice as long.   There are (at least) three ways up Richmond Hill, each takes about 2 mins, followed by 2-5 mins to get to the bottom again.   So maybe this is interval training after all? 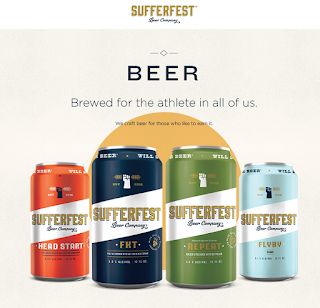 I've been looking at this Sufferfest thing that Janice and Ged have been talking about.

Personally, I don't think it's so bad.

Where in the world or more precisely Surrey 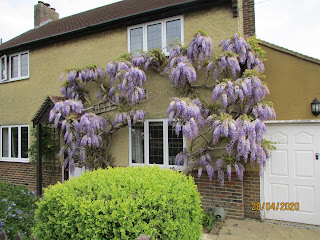 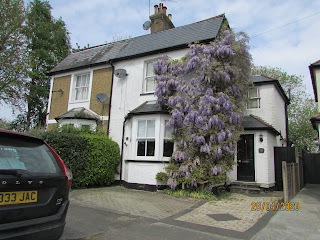 Clue not far from where I live!
Posted by mike morley at 14:52 2 comments:

Recent rides both indoor and outdoor

I’ve enjoyed a mix of indoor and outdoor rides in the last couple of weeks or so and here's a round up of what I've done.

On 6th April, I  took my older (Winter) Specialized for a 21 mile fairly flat ride from Epsom to Cobham (via Stokesheath Rd where I noticed a pill box I’d never seen before). I’d intended going down Plough Lane but it was closed so instead diverted across Bookham Common and on to Leatherhead and home. The bike was unhappy, gears and chain slipping, reluctance to change gear, sluggish (that may have been me) and desperately in need of a service. 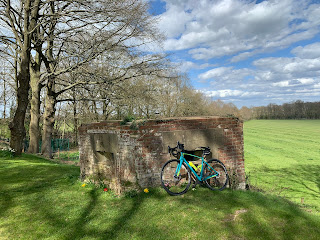 The next day I took out my newer Specialized for the first time in many months and what a joy the 23 miles were! A similar route to the previous day and as I whizzed around on my light responsive bike I forgot to take any photos.

With tired legs, April 8th’s ride was a more gentle meander through Walton on the Hill, carefully down Pebble Hill, towards Mickleham, where I stopped to take a photo, and the A24 cycle path towards home, 23 miles. As in other places, the problem with the cycle path was pedestrians who would generally split up so you had to cycle through the middle leaving less than 2 metres. 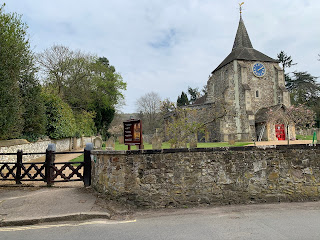 April 11th took me on one of my favourite local rides out through Walton on the Hill (again!), carefully down Pebble Hill and off towards Brockham. A glorious sunny day, 26 miles in all and I stopped to take photos (my excuse for a slower ride) and to notice the scenery and landmarks such as the 1904 notice on the small bridge in Brockham placed by County Hall in Kingston Upon Thames. 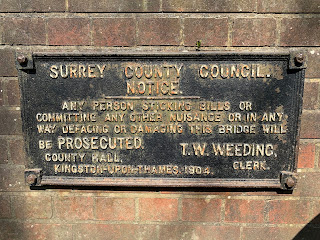 April 14th I decided on a similar circuit of 19 miles but in the opposite direction so I headed out towards Leatherhead then up Little Switzerland and  home via Walton on the Hill. I stopped at the bridge in Leatherhead and discovered from the sign quite how old and historic it is. 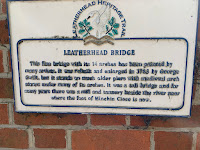 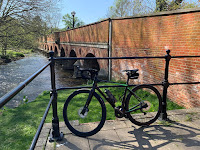 By now I was getting bored of the same local circuits and decided I would venture further afield using an old Cheam & Morden ride taking plenty of water, food, spare tubes, tyre levers and my multi tool (hoping I wouldn't find out what to do with it). I headed off towards Leatherhead and then up Beech/Critten/Whitedown and down through Gomshall where I noticed lots of large wooden statues near the Mill. From there it was through Peaslake, up Radnor Road to Ewhurst Green, Warnham, Rusper, Newdigate, Brockham and the usual route home. The bluebells were beautiful in many places. 56 miles and over 3,000 ft elevation. 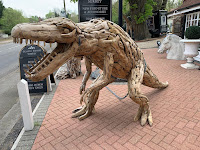 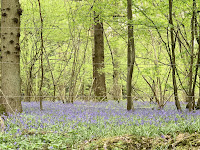 My indoor TACX turbo trainer was now set up. It's not a 'smart' one so I added speed and distance sensors, together with my heart rate monitor, which I linked to my home computer and the 'Sufferfest' website.  For the next week I had some great workouts riding along with the pros watching videos of various races in places like the Alps. I asked Sufferefest to calculate my virtual watts (as I don't have a power meter). Sufferfest then tells you as you go through the workout your target watts and cadence at any point (eg. on a tough part of a hill it might be a cadence of 60 with watts of 200, or on a medium-hard part it could be 90 cadence and 175 watts, or on an easy part 90 cadence and 90 watts). Having found that level 4 (out of 10) (I entered this info into the Sufferefest website) seemed to be the best setting for me on the TACX I adjusted my effort level for the various sections of the ride by adjusting my gears.

I think the virtual watts calculation is fairly accurate if I compare how it feels and the watts achieved to the same when I've used a Watt bike or Stages Flight bike at my gym.

If you don't have a cadence sensor a cadence of 60 is fairly slow, as if you're going up Box Hill whereas 90 is when you're whizzing along at a good pace on the flat. My natural cadence is probably between 80 and 90 so it made me pedal a bit faster.

I have an estimate of my FTP (functional threshold power) from using the gym bikes (average watts over 20 minutes x 0.95) and that was about 180 a couple of months ago so that information was also fed into Sufferfest.

If you don't have speed and cadence sensors and an estimate of your FTP Sufferfest is still a great way to have a structured workout with a video to divert your attention. A target of how hard to workout is provided (eg 3/10 for the warm up and cool down and 6 -8/10 for the hard bits, occasionally 9 or 10/10 for a short time). It would be up to you to try and keep to the suggested cadence and select an appropriate gear to match the target effort level.

There's a free 14 day trial if you're tempted to try it, just google 'the sufferfest'.

Back on the bike after a week of indoor training and it was gratifying to see an uplift in my average speed on road rides. April 23rd saw me testing myself on a flat-ish ride of 25 miles to Cobham, Effingham and Leatherhead. The sun was a shining and I included a gravel track (River Lane, Stoke d'Abernon). The last time I'd tried to ride it I had to turn back as it was completely under flood water. 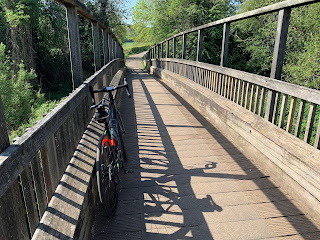 On April 25th I was keen to test my new fitness so I did a route that Neil C had led the A group on to Horley, 59 miles. I stopped to take a photo of my bike propped up against the sign for Lonesome Lane, feeling that this summed up cycling during this lockdown. 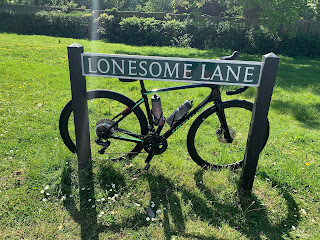 Yesterday's ride was back to my fairly usual route of Walton on the Hill, Dorking and Leatherhead. I'd not realised before that Dorking was twinned with so many other towns. 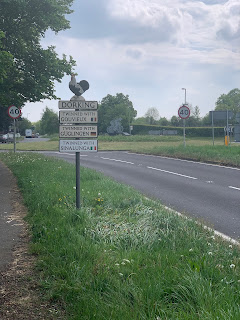 Inbetween the above I've had a couple of short local rides with my usually non-cycling daughter and recovery rides (effort level 2/10, heart rate below 103) on the turbo trainer. For all the downside (not least of which is the lack of coffee and cake stops) I'm quite enjoying the lockdown for the quiet roads and the extra time that I have! 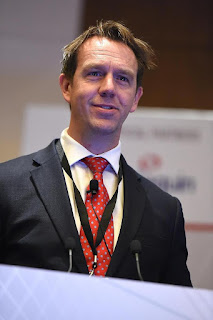 Mr Fitzboydon takes on the role from Paul Tuohy, who has announced he is stepping down from the charity after six years in the role.

Pete has a long career in the sports and leisure sector, including ten years at the Football Foundation.

More recently, he led Parkwood Leisure, a national leisure provider, where he completed a business transformation which helped the organisation grow by 20%.

He has also held non-executive roles with Badminton England and OpenActive, a Sport England-funded initiative that seeks to make sporting opportunities easier to find and book online.

Mr Fitzboydon brings with him extensive knowledge in how digital technologies can encourage more people to become physically active, having created the UK’s first sports technology business incubator during his time at London Sport.

He said: “I am delighted to take on the challenge of leading Cycling UK at a time when it has never been more important to get more people active.

“I have long been an admirer of Cycling UK’s work and I am looking forward to getting started and exploring how we can encourage more people onto their bikes, while working with governments on how they can play their part, too.”