A group 2nd May

No apologies for an old favourite - to the Blue Ship at the Haven. I may need to apologise for a pedestrian pace though as I could be still be recovering from a nasty cold kindly passed on by my nearest and dearest! Thoughts of varying the traditional route for lanes less well maintained have been abandoned after rumours of a deluge - well it was sunny in Devon today.
Posted by Brian at 20:13 1 comment:

Due to new data protection legislation, we need your consent to continue to hold your personal information, such as the Wayfarers contact list.    Our new Privacy Notice on the website explains how we use your personal info, and there is also a new Data Protection Policy, giving more details.

In the next couple of weeks, I will be emailing all our members for whom we hold details to ask for your agreement to continue.  It's important to be able to contact you and your emergency contacts on rides, and we believe the contact list helps keep the club together in many ways.

CTC HQ is also working on its response to the new legislation, but have so far not informed us of what they intend to do, so in order to comply we have had to develop a separate, and hopefully consistent, approach.   Once the CTC guidance is published, if necessary we will merge them.

Notice for B Group ride on Wednesday

B Group will be going to Guildford this Wednesday, with lunch at The Britannia pub.  Route will include Staple Lane but no off-road after lunch due to recent rains.

Many thanks
Gill
Posted by Tim C at 10:07 No comments:

The family will hold a memorial reception afterwards at,

The family have requested no flowers please, but donations can be made to Cancer Research UK.

There is no specific dress code for the funeral service; cycling club colours would be welcome (please be careful regarding cycling shoes and cleats).

In order to gauge numbers who may attend, please would you let me know by email (d.vine207@btinternet.com) by Friday 4th May to confirm your attendance at either/or both, the funeral service and memorial reception afterwards.

RIP Ken Williams.
Posted by Dave Vine at 13:13 No comments:

Well done and thank you to the nine riders who joined me for a wonderful ride into rural Kent. We experienced all sorts of brilliant colours – the bright spring green of the fields and hedgerows, the dazzling yellow of the dandelions and the cool blues of the bluebells. We also experienced an amazing mixture of spring weather – the wet and cold of showers in the morning and the wet, cold and painful hail in the afternoon.

The route from Caterham via Toy’s Hill and back to Banstead was 41.5 miles with total ascents of 2828 feet, 68 ft per mile. The final run up Toy’s Hill Road to lunch at the delightful Fox and Hounds accounted for 599 of those feet at 263 ft per mile, a long, steep climb.

Not ideal weather but a great day out and thank you Tim for keeping an unofficial eye on the rear of our peloton. 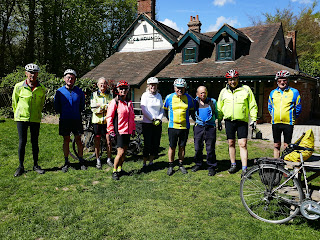 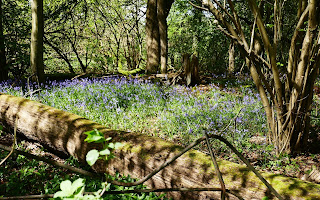 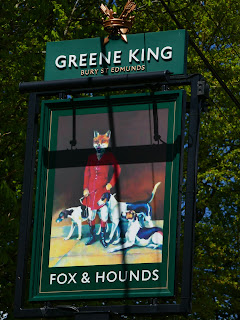 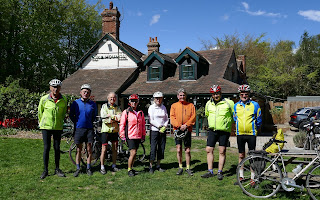 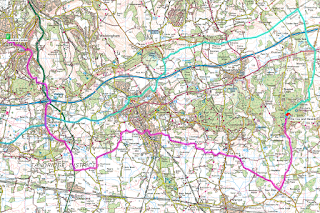 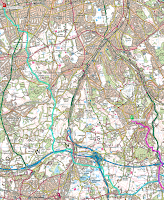 April lived up to its reputation for showers with a few heavy showers scattered throughout the day. 14 of us left Caterham in sunshine but as we headed out through Marden Park we could see rain clouds gathering. I was soon beginning to feel cold and wet and not looking forward to the journey ahead. Fortunately aided by a westerly wind we made good progress, the rain cleared and the sun soon dried us out enough to enjoy the last few miles through Smithers Lane and the pretty village of Cowden, to our final destination the Kentish Horse in Mark Beech. It was a busy pub with a large group of walkers and a few other cyclists already in for lunch, and a sign outside advising that all tables were booked. We were well catered for by the friendly and efficient staff and were lucky enough to have a dry start for our ride home, which started with a nice long descent towards Edenbridge. Unfortunately Mark had to return to the pub as he had left his glasses behind, I trust he had a good ride home. Again the rain started, plus we were battling against a headwind, but again it did stop after a while for a dry ride home. David V punctured about half way back, we debated whether to wait but as he had advised us to continue we pressed on (Thanks to Geoff for staying to assist David). Being too late for most tea stops 3 of us headed for Coughlans bakery in Caterham on the Hill for tea, while the rest made a beeline for home.
Not a perfect day this week, but an enjoyable day nevertheless.
Thanks as usual to all corner markers and Janice for back marking. 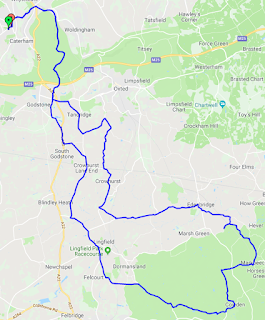 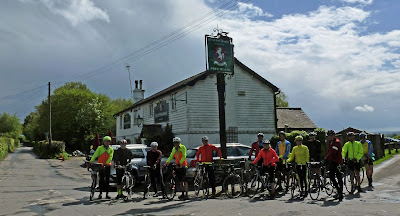 A Group 25th April from Caterham

We will be riding to Markbeech in Kent for lunch at The Kentish Horse, approx 22 miles from Caterham.
We will need to pre-order lunches, I will have a copy of their menu at 11ses. (Unfortunately there is no menu on the pub's website).
Tea stop at Knights Garden Centre Woldingham or closer to home if time allows.
Posted by Keith at 16:51 No comments:

Having had to miss lunch at the Sportsman Mogador, due to a domestic family motor car problem, I took the chance of phoning Robin to see how he was. Sadly he is still in hospital and feels that he will be there for some weeks yet. Today his cousin visited and recently Maureen.

Apologies to David Ward for leaving you on Epsom Downs but I had to get home. I took the route that Simon had said he was taking up Ebisham Lane into Walton on the Hill and it was fine even with the overnight rain no big problem with mud and I was able to ride all the way up. Interested to know eventually what route Simon took. I hope that you got to Sportsman for nice lunch!
Posted by mike morley at 16:35 No comments:

B Group ride next Wednesday 25th

John Austin has issued the following advice (warning) for B Group:

"We shall set out from Caterham, riding south and then east into Kent. Lunch will be at Toys Hill and Tea in Banstead, a total of about 40 miles. This will not be a flat ride!"

Remember that anyone meeting at North Cheam (9:30) will be led down to Caterham, probably by the scenic route over Farthing Down. You may wish to consume a larger breakfast than usual.

Wednesday’s destination of Yateley was a gamble, given that the ride was planned when the weather varied between wet and windy, and sometimes both; in particular the direction was SW and there was little chance of shortening the route.

In the event it was a glorious day, sunny with the temperature mostly in the mid 20’s but touching 30 later in the afternoon. There were 18 of us out. The only tricky bit was an off-road excursion around Frimley and across the Blackwater Valley road to Farnborough.

Lunch at the Dog & Partridge was excellently served by helpful staff. Only Brian suffered a long wait for his tuna sandwich which went missing somewhere between kitchen and bar. It was too relaxing in the warmth of the sunny garden, so departure was delayed until well after 2pm.

Return found us heading into the freshening wind, climbing Tunnel Hill out of Mytchett, and a shady excursion through Woking on the cool banks of the Basingstoke Canal. Most stopped for tea at Walton Bridge, where ice creams were the refreshment of choice.

49 miles, only 1,757 ft climbing, 12.2 moving mph.
Thanks to Mike Barrett for back marking, always clearly visible in orange, Geoff for photos, and Mark for maps & stats.
Posted by Dave Vine at 21:49 No comments:

22 of us headed out from Walton DC along Walton Lane. But before we had got very far Ray Youlden fell victim to a puncture. He kindly indicated to Terry that he would be fine making his own way to lunch. John Scott had had very little time during the winter to train for today’s ride so he peeled off and headed for home. But it was good to see him at elevenses. So, by our usual route through Weybridge to Addlestone via Ham Moor then New Haw and West Byfleet we were finally launched from suburbia into the countryside, pausing just once on the way to see if Vic had made a decent job of pruning his laurel hedge. He had and his house was just visible through the shrubbery.

We rode directly to West Horsley by Ripley Lane. I didn’t know whether anyone would take up my suggestion of going directly to the Barley Mow when we reached the turnoff into The Street. However several did so, and those of us who did the extra four miles down to the A246 and along to the Duke of Wellington before riding up Ockham Road, past Horsley Station then left into East Lane, arrived to find them all sitting around a big table on the lawn, quaffing their beverages.

This appears to be one of the few affordable pubs in the area but we were pleased with the service and the food was very good. Those of us who chose the Thai dishes had a very good lunch indeed. We were making good progress with our eating and drinking when Ray arrived but with plenty of time in hand we were all happy to loll about in the sunshine while he ate his Thai green curry with chicken.

We rode up to Ockham and towards Cobham but made a scenic detour through Downside and the River Lane to Upper Cobham Tilt. Then we took Fairmile Lane through to Esher and Garsons Farm to lounge about outside to enjoy our afternoon tea. It is a huge and quite posh establishment these days but we felt at home and in no great hurry to leave.

Thanks to Terry for back marking, Liz (absent today) for sharing the recce, and to numerous people for corner marking. We all enjoyed this proper summer’s day.

When cycling around on such a lovely day as this Lou Reed’s song often comes in to my head. You know the one. Here are his lyrics with some explanatory comments:

Just a perfect day
Drink Sangria in the park       Elevenses at the Walton DC
And then later
When it gets dark, we go home   We try to get home before dark

Just a perfect day
You made me forget myself       My mind wanders a lot these days
I thought I was
Someone else, someone good      like Bradley, Geraint, Chris,
Chris or Chris 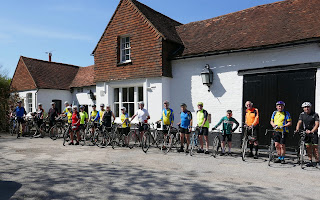 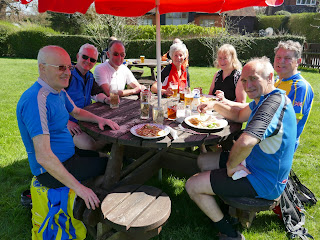 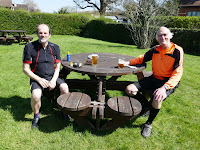 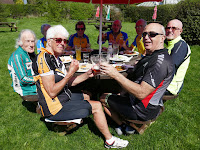 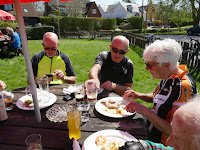 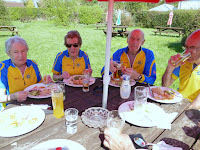 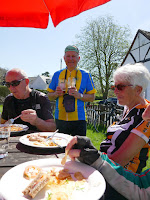 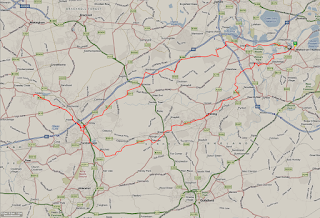 What a wonderful day for a ride!  Dave led us out West to the Dog and Partridge, where we ate well in the sun, and back to Walton where we enjoyed ice-creams for tea.

I feel that this sets the tone for the Summer ahead of us. 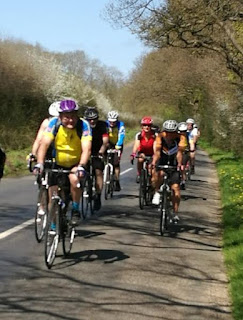 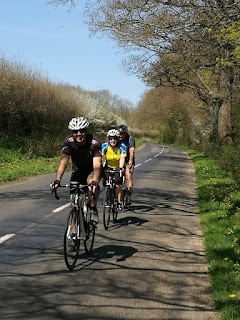 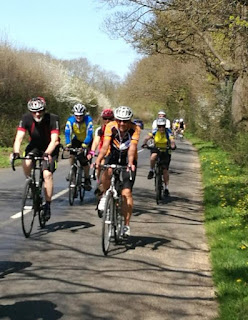