Invitation to the B Group ride on 4th August

The plan is to set off, in four groups, from our regular once-a-month meeting place, adjacent to the Leg of Mutton car park in Hollyhedge Road/Downside Bridge Road, Cobham.

From there we cycle out through the Woking area to the Red Lion in Lightwater, about 17.5 miles to lunch.

The return leg towards Windlesham and Virginia Water will finish at the Wilde Brunch café, adjacent to Walton Bridge, giving us a total of 33 miles.

I'm planning to do another recce with three leading Ladies on Monday 2nd August to adjust and fine tune the route, four heads being better than one. (I did the first recce on the 11th July) A lot of Water ☔ has passed under the Bridge since then. A route link will be published after Monday's recce.

Hopefully the list of cyclists who would like to take part can be compiled by Monday evening.

Here is my route, shown in RideWithGPS:

Invitation to the A group ride, 4 August

Next Wednesday we are riding from Cobham to The King's Head, Guildford for lunch: if it's been dry we will go along a nice section of NCN route 22 from the bottom of White Down to Shere.  If not we'll stick to roads on the way to lunch.  Return to tea at Crockford Bridge Farm, near Addlestone, includes parts of the Wey Navigation and Basingstoke Canals, all (or at least mostly) paved.   About 36 miles in total with a few hills in the morning.

I hope you can join us.  Please email me to reserve your place, by 5pm on Monday.

We had a good turnout yesterday despite the weather forecast. We were caught in a couple of heavy showers but were under cover at Squiffy’s Restaurant at The Jolly Coopers in Hampton (recommended) when the heavens opened. 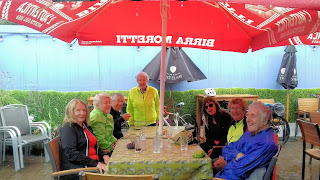 I was joined by Sandy Bayliss, Liz Scrivens, Madeleine Shearer, Lynda Barrow, Maureen Gallichan, Colin Lown, Helen Tovey, Ed Sharp and Juliet Porter at North Cheam. Juliet was having her first ride with our group but has been out with the Saturday Beginners. Our numbers were swelled by Don Elms, John Brooks, Peter Tiller and Bernard Power at Walton Bridge and Ray Wren greeted us at the lunch venue (not on his bike!).

Our morning began with a Mayday broadcast to our WhatsApp group, from a panic stricken and breathless Brenda: “Hey all , I’ve just started to pump my bike and something isn’t right, I heard a loud whooshing noise and the silver valve is suddenly gone all loose, can’t pump it and lots air came out of the tyre. ☹”

Within minutes she had received a great amount of advice, ultimately concluding that without a lock ring on the valve stem she hadn’t been able to attach the pump properly. Crisis overcome, she made her way to Ryka’s and we were relieved to see her there.

Unfortunately we all arrived at Ryka’s to find that they had closed for a family funeral, although the toilets were open. But the idea circulated that coffee and cake could be obtained at The Shop at The Plough Inn in Coldharbour, and with that knowledge our groups all departed quite punctually.

Typical of the minor misfortunes that beset our rides in these times two of our leaders had to withdraw due to precautions around possible contact with people who were infected. But with just 15 riders we reduced our number of groups from four to three and were ultimately saved by John who stepped in at very short notice to lead the first group out.

Having adopted a golfing theme for our teams we became the Albatrosses, the Eagles and the Birdies. With only three teams now I had been rescued from the ignominy of leading a team called the Bogeys.

Not having cycled up it for quite a long time I was a little apprehensive about the ascent of the Col de Harbour, not so much on behalf of all the young athletes that comprise B Group these days but for myself. However I was pursued all the way to the top by Dave Cullen, huffing and puffing like the Little Red Engine while taking care at the same time not to strip all the teeth off his one and only cog. Our Birdies arrived at Coldharbour to find that everyone else was still there and I was persuaded to enjoy a high quality cup of coffee and an apricot flapjack while two of the Birdies who were feeling very cold at that altitude tagged along with the Eagles when they left.

At Rykas we wondered where Steph had got to but due to a slight misunderstanding about times she had cycled on ahead of us, partly to confirm what Mark had written about the Anstiebury Iron Age hill fort, namely that it was very out of bounds to the public. We were pleased to be reunited with her at Coldharbour.

From Coldharbour, all the way around Leith Hill to Abinger Common then Pasture Wood Road to Holmbury St Mary and around Holmbury Hill to UCL’s Mullard Space Science Laboratory, the cycling experience is one of the best Surrey has to offer and I hope that everyone enjoyed it as much as I did. It will have reminded many of Christina’s epic ride in May which followed these roads in the opposite direction.

At Three Mile Road we plummeted to Ewhurst Green and were soon riding through Walliswood to join the others at the Gatton Manor Golf Club.

Many of us had pre-ordered our lunches and although I was expecting that we would be dining indoors I was pleased to see everyone sitting outside in the courtyard overlooking the ponds and golf course. Our host Alejandro and his team of staff looked after us very well and most of us thought the food was pretty good. 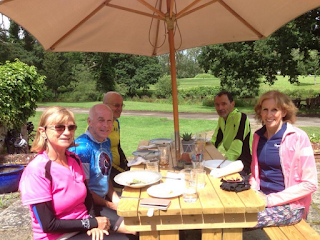 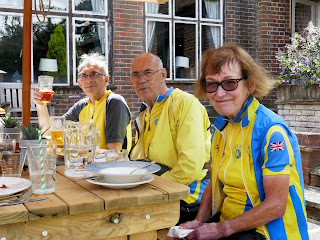 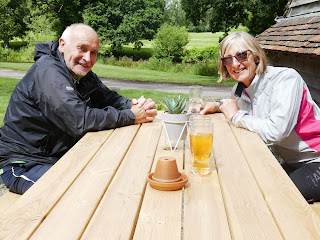 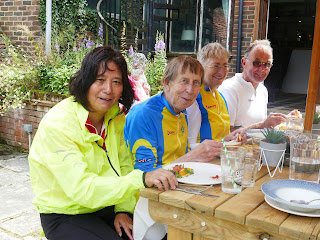 Even after the recce Sue and I remained slightly mystified about the route we had taken to leave the golf course so although I had been able to furnish the other leaders with a very accurate route I hadn’t been able to give a clear description of how to identify the gap in the shrubbery which would lead us away from the fairway for the 18th hole and out into New Barn Lane. In the event, with the benefit of some déjà vu, I found it quite easily though I think it proved to be more complicated for the Albatrosses and the Eagles. 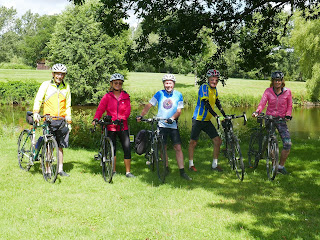 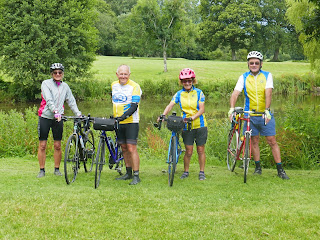 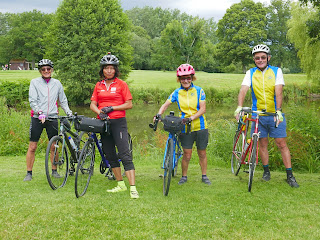 We made our way along the very quiet New Barn Lane then Cathill Lane to Ockley. I had originally wondered if the ride would be enhanced by turning off Stane Street near The Cricketers Arms and heading down Friday Street to Vann Lake for a bit of an off-road experience but during the recce Sue thought that, after the big hills and the golf course adventure, Vann Lake would be one daft excursion too many for one day. So we rode on through Capel to Newdigate where, contrary to the plan, the Birdies carried on to Parkgate for a direct route through to Brockham where we stopped for Tea. The Brockham Village Hall was an excellent place for a Tea stop, not least because our team wouldn’t have made it to Denbies in time to be served in the Conservatory.

Beyond Leatherhead the Birdies flew off in various directions though none of us escaped being caught in the deluge. Before the rain had started in earnest Anne and I had decided to take the scenic route through the commons and the paths through Horton Country Park and we were thoroughly drenched. By the time we reached Tolworth the sun had started to reappear, apologetically, but not with sufficient force to dry us out or warm us up. And I gather that many of the earlier birds had been rained on heavily during their rides home.

Huge thanks to Martin Gandy and John Austin for leading their teams of five on this adventure. Thanks to Stephen Hickey and Sue Foster who had done recces for the ride but were obliged to refrain from joining us. Thanks to everyone who was up to the challenge of the big hills and for coming out to enjoy the ride and the high quality scenery.

Martin has added these comments on his experience with the Eagles:

Although Ryka's was unexpectedly closed for a family funeral, the Eagles team enjoyed a welcome coffee and pastry at the Plough Inn cafe after a slightly wet climb to Coldharbour.  We were surprised to find Steph already there waiting for us after missing the start time from Ryka's.  Martin's Komoot let him down after Leith Hill, probably due to loss of signal amongst the wet trees, and he missed a turn.  Ken then led the way onwards towards Walliswood, until Martin was able to pick up the 'tour' again.  After lunch we managed to find Tim's secret gap in the hedge and avoided ending up on the fairway. 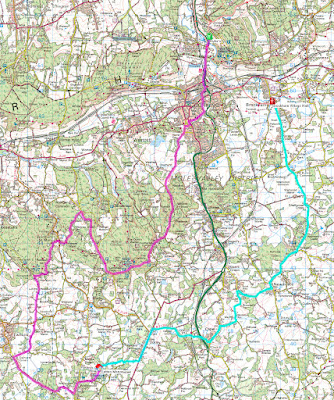