A good turnout at Walton, including Ray Dare on his 91st birthday - congratulations Ray!    It was excellent to see Mick Furnival-Adams out riding again, making steady progress on his long recovery from his heart surgery.   But only eight riders were coming to Oxford - perhaps it was the timing, just after Dieppe with several still away, or the gloom-laden weather forecast, which mellowed to mere cloud and occasional drizzle at the last minute. 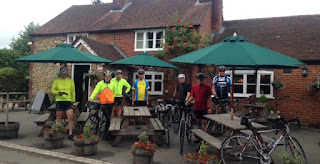 We set off promptly and headed swiftly north - Staines, Colnbrook and Iver Heath passed swiftly until we reached Fulmer, where we turned our eyes (and our bikes) to the Wild West, with some potholes to match.   Farnham Common and Burnham Beeches led us to Cookham, and then it was a push up the hill to the Jolly Farmer at Cookham Dean.  27 miles gone already and we were refuelled quickly: down, up, down as they say in the song, and we were in Marlow, all except Neil who gained a puncture on the final downhill, but it was soon fixed with Geoff's help.   We took the Oxford Road out of Marlow - well it seemed a good choice - for what I thought was the best bit of the ride - through Frieth, Fingest and Turville on a heavily wooded steady climb up to Christmas Common, which is about the same height as Leith Hill.   We had earned our tea and we were rewarded by the long downhill into Watlington, where we spotted ginger treacle cake and I think most of us had a piece with our tea. 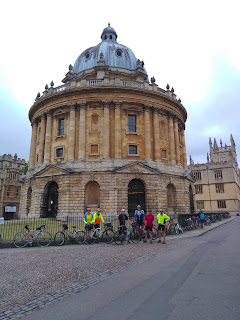 Steve left us at Watlington to ride back home.  From there it was flat geographically, but downhill scenically, on a B road which was much busier than on the recce.   We avoided about half of it by detouring into nearby villages, but the rest was hard work until Cowley, where things didn't really improve with slow rush hour traffic and, well, Cowley doesn't have the visual attraction of Oxford city centre.   Suddenly we were in the centre with less traffic, more bikes and university buildings all around.  Despite it being about 6pm, Neil was intent on riding straight home - well it's only a short day for someone who does back to back audax rides on a weekend.   The remaining six found ourselves in a 12th century pub, the Turf Tavern (reputed to be the hardest to find in Oxford, but my GPS knew exactly where it was).  My extensive research also uncovered the fact that former Australian Prime Minister Bob Hawke set a Guinness world record there for drinking a yard of ale in 11 seconds.  Mark was staying overnight for more 'sightseeing', and the rest of us caught the train back.
Thank you to all for your most enjoyable company, and especially to Geoff for back marking.
Posted by Simon L at 18:25 No comments: 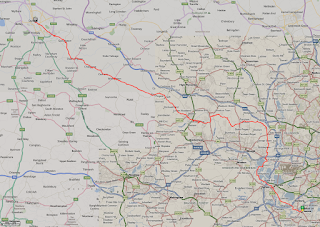 Our leader promised flatness and beauty for our ride to Oxford, and, indeed, both were delivered in considerable measure.  But not entirely... 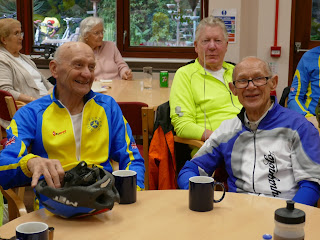 What a grey day but at least it didn't rain and it wasn't as hot as last week!  A group of 19 set off from Walton Day Centre, including Birthday Boy Ray and new rider Howard whom we hope to see again but he is still one of the world's workers, so appearances may be sporadic.  This was my Two Rivers Ride (Thames & Jubilee) but in reverse!  There was a short taste of the Thames as we took the towpath to Walton Bridge, otherwise the bulk of riding by the rivers was after lunch.  Our route was out through Chertsey, skirting Thorpe and into Egham where we took Hummer Road down to the A30.  Traffic was extremely fast here, so crossing over to the Meads took a while and enabled Tim & Ray Wren to catch up.  We now followed the Runnymede Road and went through Old Windsor before taking the Datchet road into Windsor itself.  There was a Dog Show going on in Windsor and the open grassy area on our right was covered in tents and caravans!  Crossing the river into Eton, we followed Route 4 and then Route 61 to Eton Wick & The Greyhound Pub.

Having pre-ordered our lunches, everything worked well and we set off again at approximately 2.15 p.m. heading for the Jubilee River path which took us to the Eton-Datchet road.  It was now a very familiar route - Datchet, Wraysbury, Staines and the towpath to Laleham, Shepperton (where some left the group) and on to Squires in Halliford Road for tea - 12 of us.

A low-key, flattish ride (the only hills were bridges!) we covered approximately 33 miles from elevenses to tea.  Thanks to everyone for your company, to the corner markers and to back-marker, Tim. 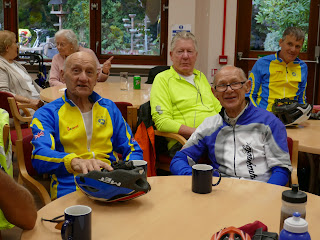 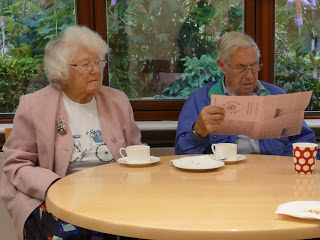 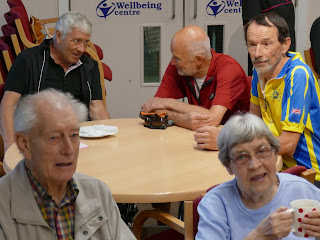 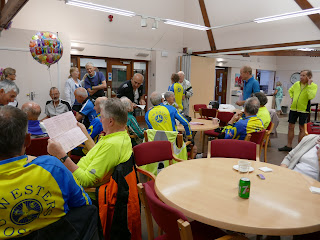 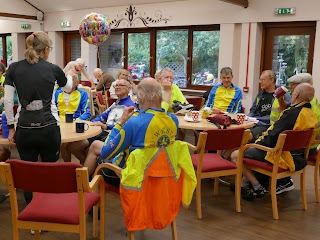 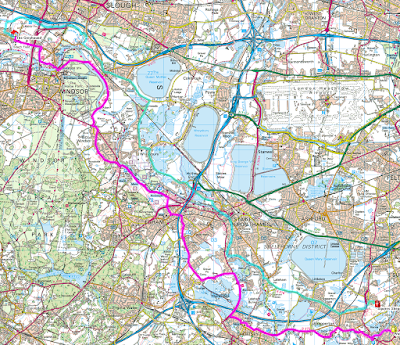 Thank you very much for a cool dry day, good company and no rain.  It was great to see Mick out again after his major heart operation in February. Lets hope he gets fitter very soon so he too can go on some more of the DAFT ‘A’ rides again.

Newhaven to Lewes, a shortcut?

When we disembarked from the Dieppe ferry in Newhaven yesterday afternoon Pat and I pondered our options then decided to take the series of paths which follow the Ouse to Lewes. Good memories of riding in Normandy and the pristine afternoon sunshine which greeted us in Newhaven inspired this idea.

With OpenCycleMap running with Viewranger on my phone navigation wasn't a problem. Coming off the bridge which links the station with the town there is a set of lights with a safe crossing which enables cyclists to pick up the West-bound path to ride against the flow of traffic on the North Way, then a small link path to join Elphick Road and beyond on to the cycle route. 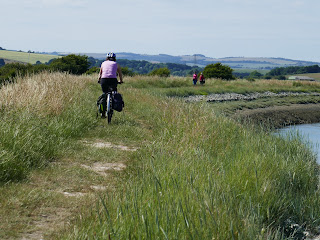 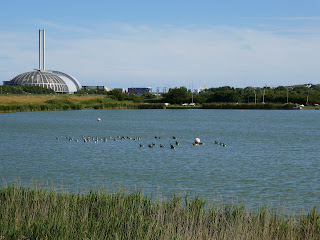 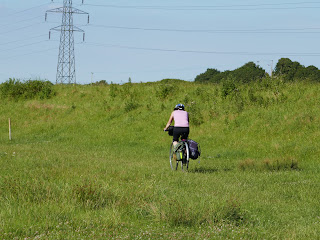 The route, most of which is known as The Egrets Way is an ongoing and very commendable project being pushed along by the Ouse Valley Cycle Network (http://ovcnet.ning.com/). The quality of the path varies greatly, from wide and smooth to narrow and diabolical. With our luggage and, in my case, inappropriate wheels (25C slick tyres), we were glad to have explored the route but would not do it again without bikes better suited to offroad riding. At times it was best to ride along up on the levee where the views of the river and landscape were better and at other times the better path seemed to be down on the flat. 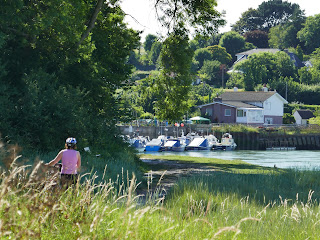 At Piddinghoe the path comes out on the Piddinghoe/Kingston Road and after a couple of hundred yards there is a left turn into Harping Hill. It was a mistake to try this; it is fairly steep and we missed the turn off it onto a walking track which appeared to be utterly unsuitable for our sort of cycling. So we rejoined the busy road for half a kilometre and were glad to turn onto the Egrets Way to be alongside the river again. 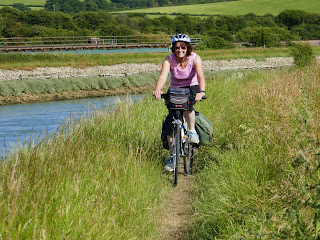 North of Southease there is a section which was wet and very swampy, whether from heavy rain or higher river levels wasn't apparent. This was the worst bit. I walked most of it.

Just before the route passes underneath the A27 there is a dramatic improvement in the quality of the surface and we arrived, after nearly two hours, at Lewes Station.


In all, more of an adventure than we had bargained for though, at rush hour, less dangerous than the dreaded Piddinghoe Road/Kingston Road which we normally take.

B Group ride from Walton DC

Gill will be taking B Group to a pub in Eton Wick and will be asking for our lunch choices from the menu during elevenses.

Showers are expected at times during the day.

Tea will be in or near Shepperton.
Posted by Tim C at 18:44 No comments: 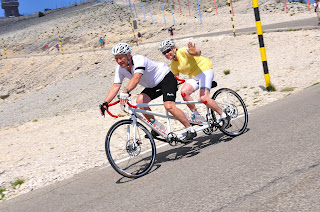 Sixth time - doesn't get any easier! 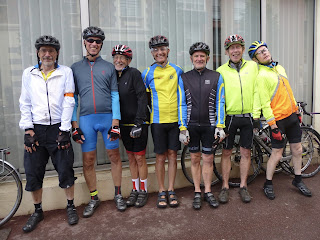 Before the start of the 140k at la salle Paul Eluard 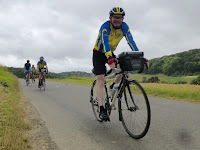 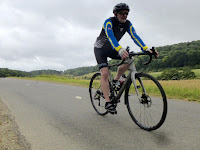 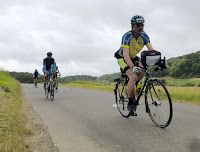 Posted by Ged Lawrenson at 15:30 No comments: 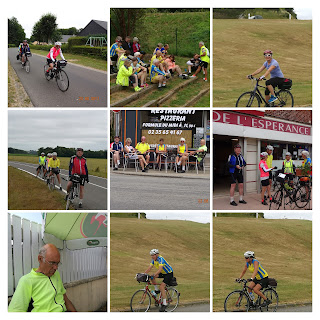 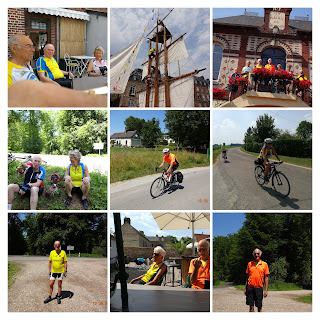 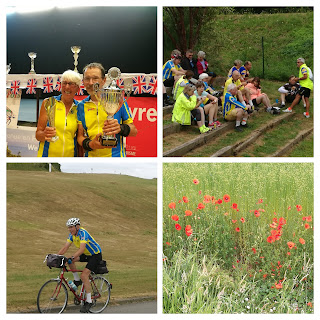 We were the largest group at the event had the least young female and a reminder why we are there.
Posted by Tony at 07:19 1 comment:

As previously advertised on this organ, the A group will be heading to Oxford on Wednesday.   A beautiful destination, and it should be an enchanting ride too.  63 miles from Walton: we will stop for lunch at the Jolly Farmer, Cookham Dean, and tea at the Granary, Watlington before the final push to Oxford, where I understand there are pubs.   And a train station.   There are frequent trains back to London, most via Reading but some via the Chilterns line to Marylebone if that appeals to anyone.   My experience, confirmed by an undergraduate there, is that there is plenty of space on trains for bikes.  A full price ticket (to Twickenham) is £24.90 but groups of 3+ can get 30% discount.
Hope to see you there.
Posted by Simon L at 20:00 No comments:

Before coming to France Colin was suffering with a tendon problem and unnfortunatley it ruptured on a climb. He went back to the UK Yesterday, he now has his lower leg in plaster.

Well that was quite a ride.
Four of us left North Cheam at 8.45 including Christina and Miles who normally ride with the B’s. We were joined by Mike Morley at Walton on the Hill who proved a most helpful back marker.

At Tanhouse a group of 18 set off just before 11, after posing for Geoff’s camera. It promised to be the hottest day of the year so far, and we were not disappointed. However Mark Gladwyn’s southbound route cleverly ensured that for much of the time we were riding in the shade of roadside hedges and trees on our left. Conditions became more trying around Small Dole and as we approached the South Downs, with little shade, a southerly headwind and more traffic. After crossing the River Adur on a gravel track, the final couple of miles to Shoreham were much pleasanter.

Lunch was at the Bridge Inn, where we arrived just after 2pm. Food was good and served surprisingly quickly. We were joined by Angie Launder, a long-time friend of the Sou’westers, who had cycled over from Worthing.

Getting going after lunch was more difficult; the thought of a 40 mile ride back to Leatherhead certainly made the thought of a second cool drink more attractive. Two of the company left for the station, so now we were 16. By 3.40 we were on the road, after crossing the fine new cycle bridge to Shoreham Beach. No time to pause at the Airport, we made reasonable time helped by a tailwind, almost to Partridge Green, where an enforced puncture stop meant the traditional ice cream stop had to be postponed until next year. The temperature was still above 30 even as we approached Horsham around 5.30. Here two hardy riders elected to ride on without refreshment, others to make their way to the station for trains home.

The final 8 left Horsham around 6pm to tackle the climb up Old Holbrook, steep but by now getting cooler. By Rusper the group got the feeling that home was not far away, and we completed the ride with a visit to Leatherhead’s Wetherspoon. Unfortunately I was too desperate for a drink to remember when we arrived.

71.5 miles Tanhouse to Leatherhead, but most will have done considerably more. 3,590 feet of climbing – not bad for a flattish ride.

Congratulations to all who took part; undoubtedly the most challenging of all our Shoreham rides.
Particular thanks to Geoff and Simon who shared back marking, GPS and photographic duties. It was a reassuring to me that we had a couple of riders with the GPS route loaded, so that we could on occasion split the group. Thanks also to all the corner markers who helped keep the ride flowing. 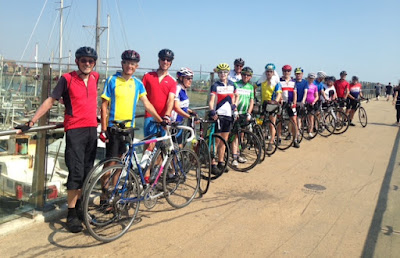