Not the DIY Hilly 50 Again!

What better than the warmest day of the year to ride the new Hilly 50, unlike the traditional H50 which normally comes with rain, snow or ice.

First off Sassi’s Café, just what I needed after a stiff 6 miles into a fresh breeze. There’s Turmeric Latte with black peppercorns for those who can’t take normal coffee, amongst many delights. 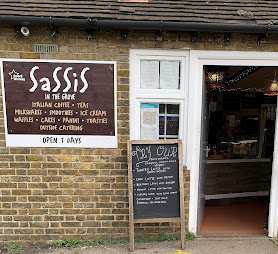 Next the pleasure of meeting Fixie Dave and Tony Hooker at the start. We all peered into the mysterious Hoggpytte before they set off, while I lingered to view The Grotto, traditionally one source of the mighty Wandle. 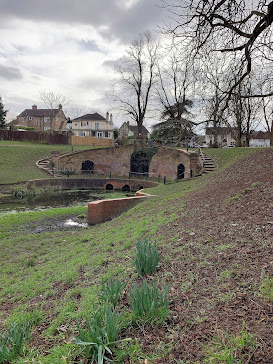 Out of Carshalton Park the climbing started almost immediately, unsurprising as the first climb was up to Banstead, where I encountered Grant. There’s plenty of climbing on this ride but some fine descents, of which Holly Lane is one for the longest and finest. Enjoy it while you can because you are turning up Park Rd to (er) Banstead. Next it’s Woodmansterne and Rectory Road descent where I met Dave Ward; no time to stop as I’m descending and he’s climbing.

We are headed to Coulsdon, the centre of various hilly loops via a roundabout route which makes sense only to it’s author Paul James. Here I met Paul and Maggie outside DD’s café, refuelling after a gruelling headwind climb of Farthing Down. I wonder whether he bases himself there to check all H50’ers are doing the full 40 miles. We have a nice chat. I have now met 6 Wayfarers en route,  a record for me, and very welcome too after weeks of isolation.

Next it’s Cane Hill, looks daunting but in fact easier than that, through the old mental hospital grounds, and down again to (er) Coulsdon. But on the descent on a previous excursion with Neil I had noticed a curious road name – Iron Railway Close. This commemorates the Surrey Iron Railway which passed nearby and formerly carried goods up and down the Wandle valley from Wandsworth as far as Merstham. It was the world’s first public railway, opened in 1804 and was decades ahead of the steam engines and steel rails which would eventually make railways an economic success. Not much survives now of what was a major engineering success, but in Coulsdon there is an embankment which carried the railway over the Chipstead Valley. In it’s pre-Industrial Revolution time it must have been an impressive sight. 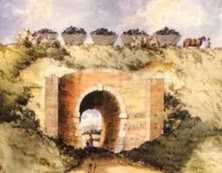 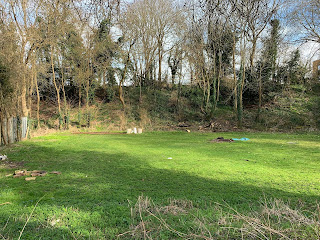 Another climb takes us to Netherne, a rather more spacious hospital development. It’s time for lunch. The shop offers perfect Audax fare, an out-of-date treacle tart reduced to 20p, and I spend a peaceful break sitting on a rock looking at the old church surrounded by old redwoods. 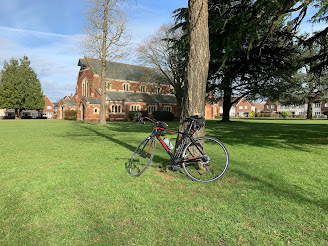 Paul likes to pack ‘em in, so its up Star lane to Hooley, where eerie creatures guard the war memorial. Then down White Hill remembering to avoid the slick of old concrete spread across the road at the fastest point. The ride opens up here; we are in the country and the next challenge, Hilltop Lane is 5 miles away. I make a diversion along Harps Oak Lane to view the next Surrey Iron Rail site, a huge cutting alongside the A23. There’s a lot more of it further north, but across the M23 exit ramp and accessible only to the very brave. 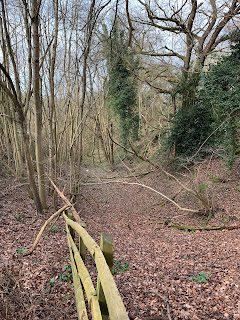 The  stiff breeze from the south has hampered progress so far, but on Harps Oak Lane it’s a blessing, especially on the steep final climb. After Caterham I choose to ride the A22 to keep the bike clean and the speed up. Up to Kenley is tough, and it always feels as if there are ghosts on the airfield. Silver Lane in Woodcote is charmingly prim, but the menagerie in one garden including a white gorilla must be considered a scandal by its neighbours.

A final swoop back to (you guessed) Coulsdon sets you up for the final climb; this time I confess to erring and taking Rectory Lane to minimise the distance riding into the sun on Chipstead Valley. 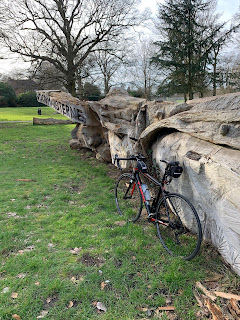 Mike would have protested at every climb, but he would have loved the descents. Thank you Paul.

Emulating the Hilly fifty Route, or trying to:

Tony Hooker and myself got off to a good start, thanks to Dave Vine coming to Carshalton Park to officiate at our departure. 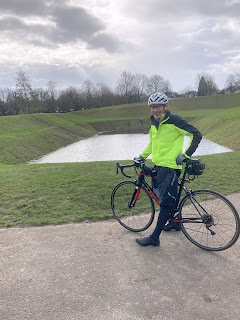 But there wasn't any sign of the inclement weather that Paul James had spoken about ?

We did see Grant around that area.

The navigation didn't go very well, since the RideWithGPS app on my iphone was being recalcitrant, it was probably sulking due to not having been used for some time.

However Tony's sense of orientation helped to get us along the route, with intermittent use of my app.

We stopped for sustenance at Poppy Café in Coulsdon Memorial ground. Which also revived my RideWithGPS app, and made the second half of the ride flow better 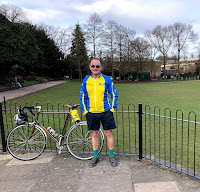 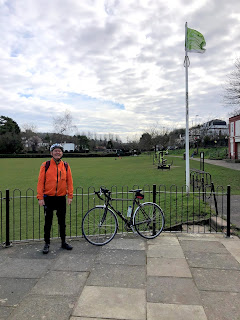 The ride seemed strange to me riding with Gears, it's hard to believe that a lot of cyclists seem to enjoy using them all the time?

Well just maybe the gears got me up some of the hills and undulations that the fixed wheel might have succumbed to. 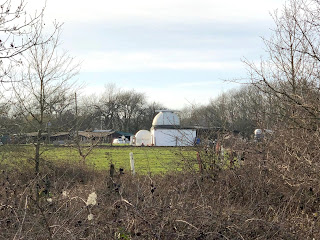 Above is a picture of the Kenley Observatory that Tony spotted on our afternoon leg of the ride.

All in all, the Hilly Fifty was a pleasant ride.

Many thanks to those who compiled the route.