in memory of Mike Morley

Despite everything the Covid virus throws at us we are determined to maintain the long tradition of the Hilly Fifty event, this year especially because we lost Mike Morley, who did so much in recent years to keep it going, when he died in Epsom Hospital on 19 January.

Therefore we are proposing a DIY Hilly Fifty over a local course to meet the Lockdown requirements, but we are conscious that this is local only to some of our club.  Those who cannot get to our suggested course are invited to work out a similar course of their own and report their adventures on the Blog, preferably with pictures for the rest of us to enjoy.

The route we have designed starts at Carshalton Park and takes you over the North Downs around Banstead, Chipstead, Merstham and Caterham, finishing at the Woodman in Woodmansterne.  It is almost exactly 40 miles with over 3,000 feet of climbing.

The challenge is simply to attempt the course within the Covid restrictions (currently, therefore, alone or in pairs) and then make a donation in memory of Mike Morley to St Raphael’s Hospice through the Hilly 50 Just Giving page ( here.).

Many will want to do it in one go, but you don’t have to.  We have designed the course so that the first half in particular is zigzag and very local, and it would be easy to break off at any of several points and come back another day to finish.

For those who want to record and compare times, that’s fine, but time is not of the essence.  Just as a guide, the recce took a B Group rider trying to keep a steady pace and old enough to have his Covid jab in the first week of February four and a half hours of riding.  (Last year the same rider took four hours over the “real” Hilly Fifty).

It is a challenging ride which you undertake at your own risk, so please carefully read the risk analysis  (which is on the blog below this invitation). This includes recommendations for toilets and refreshments along the way. The course can be found here in RideWithGPS. For the full set of documentation including Cue sheets (Route books) and GPX files please visit our Hilly 50 web page.

It would be good to hear from club members about their rides, on the blog or to the editor of Sou’Wester.

The single most important thing, whether or not you finish the course, please, is to make a donation in memory of Mike ( here.).

In the words of Samantha Bourne, events fundraiser at the Hospice,

Mike and his wife, Barbara, have supported the Hospice for many years and we were and are so grateful to them for their unwavering support, they really have made a difference to our patients and their families with the amazing amount of money they raised over the years. Mike in particular continued to support us through his love of cycling and continued to do so despite the devastating news he received early last year about his health.

Mike was the consummate gentleman with a wonderful sense of nobility. We loved to see him when he popped in having cycled through whatever weather to get here and when he did arrive, soaked or sweaty, his friendly and infectious smile lit up the room. He was ever the optimist and his grit and determination to finish each course he set out on, no matter how challenging, served him well over this last year as he battled his illness. His zest for life would not be dimmed. Mike will be greatly missed by so many people. We will be eternally grateful for all has done for the Hospice.

He will forever be our cycling champion and, owing to his uniquely decorated cycling helmet, will always be known affectionately as ‘Mike with the feathers in his cap’ to us here in the fundraising office.

Mike Morley was a member of the Kingston Phoenix Road Club and the South West London section of the CTC, riding most weeks with the Midweek Wayfarers section on a Wednesday.  He was at one time the editor of our magazine and rides list, the Sou’Wester.  Many people will remember him from recent years as the man whom Jeff Tollerman, of the Cheam and Morden Club, so touchingly and succinctly described.

Mike was like Marmite. I cannot remember when I first met him, but he was always a challenge. We were like chalk and cheese, but enjoyed a pint and a good argument, always without ill-will.

On a club ride, he was an iconoclast. You needed to give him a wide berth, if you could. You never knew where he was next going to appear – on your shoulder or recklessly overtaking the leader to disappear in a cloud of dust down a hill, like Toad of Toad Hall, oblivious of where the ride might turn off, only to appear late at lunch, if he was lucky. He never understood traffic lights. He has, alas, gone through one red light too many.

For me, the death of Mike is the death of a friend. That is a loss that comes as a great shock.  He was disarmingly open about sharing the details of his successive medical mishaps and tribulations. I could never understand how his instinct for survival enabled him to survive so many close scrapes on the bike. In the end Covid caught him out.

Mike was not always an eccentric fellow with a feather in his cap; these words from Brian Powney of Kingston Phoenix touch on the cycling prowess of “the mad hatter”

Mike rode most Phoenix club events, targeting the Handicap Points Trophy, which he won a few times and supported the club’s annual attempt to win the Southern Counties Cycling Union’s Rawson Shield.  He used many of the events he was involved in to support and fundraise for St Raphael’s Hospice.

Before Mike came to the Phoenix, he started cycling and time trial racing as a member of the Long Eaton Paragon CC.

He had many racing achievements.  One of them being his first win in a 100 Mile Open TT at the age of 23.  Winning the Burton 100 with a time of 4-18-and a few seconds, Cycling Weekly carried a full-page article on the event, with the heading, MORLEY WINS BURTON 100!  He went on to finish 5th in his first 12 Hour TT with a distance of 243 miles.

Also in 1963, with the Long Eaton Paragon being a member club of the Burton and District Cycling Alliance, he won the BDCA Senior Best All Rounder Competition with the following times and an average speed of 24.068 mph.

With these times and his 12 hour distance Mike could have been Phoenix Club Champion through many years of the 1960’s!

To this day, Mike still holds the Long Eaton Paragon CC Club Record for the Hill Climb up Holly Bank, Ambergate, off the A6 road near Matlock, Derbyshire. 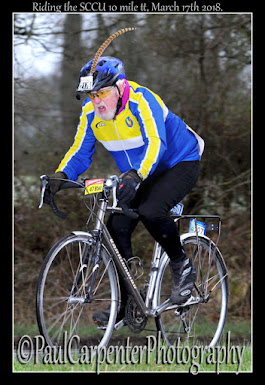