For me the day started somewhat foggy, but this had burned off by the time I arrived in Hersham where quite a few Wayfarers were starting to gather. We had 25 signed up for the Bs and a similar number were in the As. The Cs had also started arriving as we were preparing to leave. I wonder has there ever been so much dayglo yellow, orange, red, etc in Hersham before? Not that Hersham needed brightening up; the Wayfarers were lucky with the weather again. We had a perfect bright and sunny winters day for our ride.
Sadly 3 of the Bs efforts to make it to the start line were thwarted, it’s a shame they couldn’t join us. So 22 set off in 3 groups led by John Austin (Jam Roly Polys), Dave Cullen (Sticky Toffee Puddings) and yours truly (Spotted Dicks).
The first part of the route took us past Walton and Weybridge stations and then on down to the old Brooklands racetrack where we stopped to admire Concorde at the Brooklands Museum. Then to Byfleet, where we cut through the appropriately named Muddy Lane to emerge out into the countryside of Wisley and Pyrford. Going over the bridge at Pyrford lock we came across a ‘Road Closed Ahead’ sign, but we were able to proceed with the approval of the BT engineers working there and luckily everyone managed to avoid the low hanging and barely visible telegraph wire. At least there were no cars.
An hour in and as we approached Ripley we caught up with the Sticky Toffee Puddings. So, to use up some time and to restore a bit of a gap we stopped to take a photo. I’m not sure what this building is. It looks like the gate house or lodge for a bigger house, but I can’t see anything there on Google Maps.

We set off again towards Ripley and Ockham, the scenery particularly appealing in the winter sunshine. We were held up for a few minutes in Guileshill Lane waiting for cars to pass. For such a narrow and out of the way lane there seems to be a lot of traffic. We carried on through Downside village and in to Bookham Common where we caught up with the Sticky Toffee Puddings again. This time we endeavoured to maintain a polite distance until we arrived at The Running Horse where Madeleine would join the rest of us for lunch.

The pub arranged for us to all sit together in one area of the pub where we ate and quenched our thirsts very well, enjoying the chance to rest and chat. 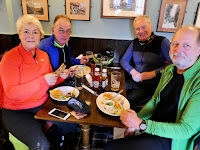 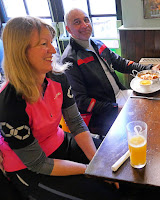 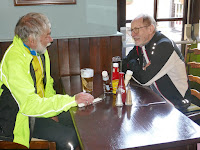 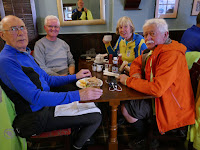 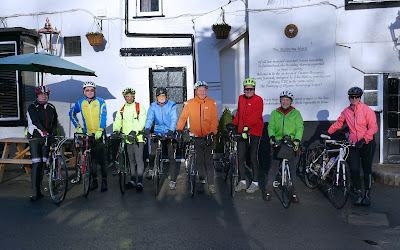 After having refuelled, most of us went our separate ways towards home, but a small band of Wayfarers, led by Tony Hooker, made their way to the Old Moat for tea.
Thanks to John and Dave for sub-leading, to Terry for back marking my group and to everyone for their company.
Clive

Report of the middling group, aka The Sticky Toffee Puddings.
Our departure time was 10.45am, which was the time that we endeavoured to depart at.
We were listed as being a group of 8, but it came to pass that 7 of us keen cyclists set off from Hersham day centre.
It became apparent that our route was one of varied terrain, and the ride included  various roads, paths and lanes, which weren't too busy.
A good choice of lunch time venue, that being the Running Horse in Leatherhead.
Condolences to those cyclists who planned to join the B ride today, but couldn't make it, for one reason or another. You missed a good ride.
So all in all a well crafted route. Very well done Clive with your first route for the Wayfarers
Thanks for your company, my fellow Wayfarers.
Dave C 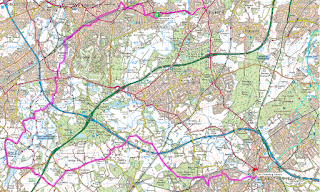 The unidentified gatehouse is indeed the entrance to a larger building. I took a picture there in the summer and did a google search for the picture. It turned up the estate agents details for the lovely house and garden behind it - just above my price range at £10 million asking price.