After Elevenses at the RBL Pete was the first out with his team. 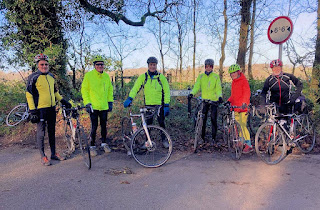 Two became one at Cobham after a bit of group swapping and a few folks dropping out. Our newly formed group set out for the North Downs and despite the day’s forecasted Arctic temperatures the weather was perfect for a winter cycling outing. Mr Court had chosen one of the more challenging routes up onto the Downs to fully test our lung capacity and work off a few excess Christmas kilos. Shere Rd done, we headed down Green Dene and into Dirtham Lane to brave the savage speed humps and a stray dog who eyed us up with a view to a possible early lunch hors d’oeuvre. He obviously had better lunch options in mind and we all continued unscathed to our own lunch venue at The Woodman in Ashtead. A perfect choice for times of Covid with lots of room to spread out and welcome warming fires. Thanks to group members Christina, Clive, Tony, Alan, Martin for their good company and last but not least Tim for devising a perfect winter cycling route.

Having run out of ideas for team names and needing to move on from names associated with Christmas excess I settled on the more humble staple of the cyclist’s diet, pasta.

By the time we were ready to head out into the sunshine the composition of the teams had changed considerably for reasons which the people concerned might be too embarrassed to read about in these pages. However Pete Beyer set out pretty much on time with the Tagliatelles never to be seen again, until lunchtime. Despite a slight difference in the recommended cooking times Sue Foster and I decided that we should combine the Tortellinis with the Tortiglionis to make a team of eight and once the water had come to the boil we burst forth into sunny Surrey, cruising along with the sun in our faces until we reached the foot of the only mountain of the day, Shere Road. For this I very much appreciated being the back marker but eventually arrived at the summit to find everyone waiting and starting to feel cold again. The group carried on while I called into the ‘gents’. But I thought that I would catch up soon enough.

On the way down Green Dene I caught up with Christina but stuck to my role as back marker rather than overtake or distract her during the descent. On the main road we rode up the steep little incline to the intersection with Dirtham Lane where she looked back to confirm that I was on my way up and then carried on.

I arrived at The Woodman to verify that everyone had arrived, including Terry, Jacqui, Madeleine and Brenda who had all made their own ways there. Chatting to Christina and confirming what colour her bike of the day was (blue) it dawned on me that it wasn’t her or anyone else we know who I had pursued down Green Dene. So somewhere out there will be a bewildered woman telling a tale of being chased downhill by a strange old bloke on a gravel bike. How embarrassing.

Lunch was good though we ended up scattered around on different tables rather than all in the same area. We are grateful that pubs like The Woodman can continue to function at all and I hope we can visit again.

Not being too optimistic about the weather we might encounter today I didn’t plan an afternoon ride and had dismissed the idea of a short three mile ride to The Old Moat. Most headed off in different directions after lunch but Tony undertook to lead Alan, Jacqui and I to The Old Moat. Tony came up with a nine-mile route out of his head, passing the Epsom hospital and droppong Alan off, lots of paths, then through the playing fields at Nescott College and then Ewell. We arrived at the garden centre with just enough time in hand to order our coffee and cake which was very much the fine stuff we have come to expect there. 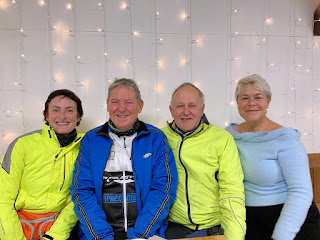 It was getting dark when we left, with a glowing fringe of red and orange on the horizon and a beautiful croissant moon in the crystal-clear sky above the bike shelter. At home later I stepped into the garden to look at the moon but it was too low on the horizon to see and my astronomy app showed that it was almost perfectly eclipsed by now. However, just above where the moon should have been was a most scintillating Jupiter. Brilliant!

A big thank you to Pete and Sue, who were the engine drivers for today allowing me to trundle along behind in the caboose. Thank you to everyone who braved the early frost to come out for a ride. We had to marvel at our good fortune with the weather.

A few people made their own way to The Woodman, notably Steph who had slept in but rode the entire course just a little later than the rest of us. And by taking a direct route to The Old Moat she had been and gone by the time Team Tony arrived.

Madeleine and Brenda had noted that the prescribed route didn't involve any rough tracks, puddles or mud so elected to do their own thing before joining us for lunch. 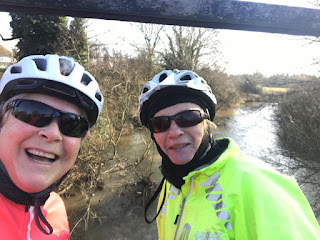 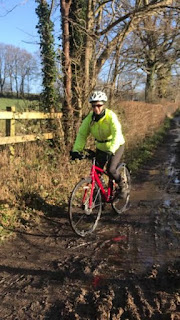 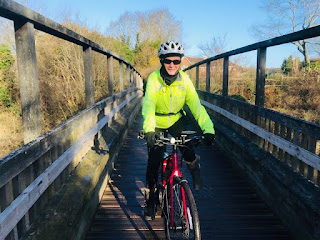 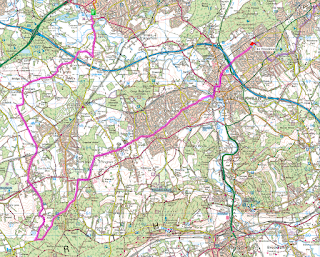