With the prospect of a short ride following on from the previous week's annual lunch I decided to offer the A group the option of a pre-competion 21 miles. This meant an early start of 9.10am from the Tea Hut at the top of Epsom Downs so I was unsure of the response but it turned out to be a popular choice with 14 of us meeting there, leaving 6 to start the day a little later in Dorking, just a short ride away from Roothill.

I split the 20 riders for the day into 2 groups with Neil sub leading a faster group and me leading a group at a pace that suited the rest of us. Here's Neil's report of his slightly eventful ride.

(Edit: Neil’s report has been deleted and re-posted separately to enable his photos to be be seen).

My group comprising Dave V (thanks for back marking Dave), Dave W, Sue C, Richard and Pete B left the Tea Hut first to allow Neil's group the joy of overtaking us, which of course they did. It was a cold start and I for one was regretting my lack of layers. However, the day was clear and the roads and scenery pleasant and by the time we arrived in Brockham the sky turned blue so we were able to sit and enjoy our coffee and cake outside in glorious warm sunshine.

Off we then went the couple of miles to the freewheel competition where we were joined by the rest of my group; Keith, Mark, Dave F, Gina and John B. Ged had led them from Dorking and he went on to join in with Neil's group.

The freewheel competition started and some, myself included, had their ride frustrated by a fast moving tractor. However, Sue C managed to claim a resounding victory by not only winning the ladies competition but also by beating the men, not something that has ever happened before. Well done Sue! Marcus won for the men with Keith taking 2nd place. 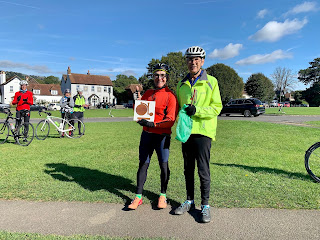 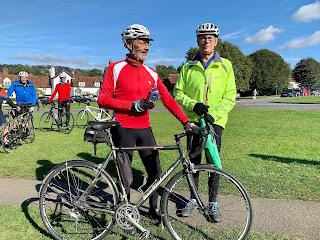 After prize giving we split into our 2 groups and took a relatively straightforward route to The Star in Rusper. My group managed to get to the bar first and avoid any queue due to Neil's mechanical issues. The Star did an excellent job of serving 20 of us bearing in mind they also had a large group of West Surrey CTC there. 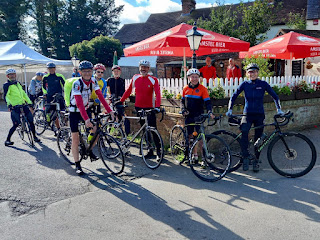 After lunch, still in glorious sunshine, we dropped down into Horsham before turning towards home. The long descent was then paid for by the ascent of Wimlands Hill after the Frog and Nightgown. We mainly travelled lovely Surrey roads and lanes but with one incident with a van driver who edged so close to Sue that she was able to knock on his window.

With some gritting of teeth the group went up Boxhill and it was worth it for the sense of achievement after a long ride and for the fantastic coffee and cake in Destination Bikes. I'll certainly be using there again!

Thanks you for your cheerful company on a glorious early Autumnal day with particular thanks to Dave V for back marking and Neil W for sub leading.