I have had some tentative plans for cycling in the Welsh borders for a while but for a raft of reasons this didn't come to fruition until last week - as summer faded away while I drove down the M4. I stayed in Hay-on-Wye for a few nights and was rewarded with two "fine" days to make it worthwhile.

Heading north, roughly following Offas's Dyke, across country where the rivers run west to east is always going to be a challenge - bordering on the insane, perhaps. A gentle start soon comes to an abrupt end where the map identifies Clyro Pitch as the road to take. Two miles and seven hundred feet later there are a couple of miles respite before the topography provide a brutal encore out of Newchurch. From here it's gentler, these things being relative, across the barely populated centre of what was once Radnorshire - indeed through Old Radnor itself. The lack of traffic, even on B roads, is a delight but as a result Knighton provided the first cafe in 23 miles. Plans for a scenic extension along the Teme valley were drowned out by the weather changing from Met Office to BBC version. I sat out the heavy shower having an early lunch before the journey south along the Radnor Ring cycle route 825 took me along what is literally a border road.

Presteigne was once the county town and is quite a fine place for one with a population of less than 3000. Onwards into England where the only cafe in Kington open on Mondays provided a welcome coffee and cake. The final push back to Hay was south west into a strengthening wind. Never mind, shelter was available - provided by Brilley Hill being steep enough to provide it. Only 50 miles but 5000ft of ascent.

Tuesday:  Rain stopped play but lunch in Brecon with a school friend from South Wales provided a more than acceptable diversion.

The best day of the week said the forecast but it was a close thing and once again a return into the wind. The rain was just petering out as I left Hay. The road up to the pass was almost busy with a group of eight ladies from the |Midlands cycling Lon Las Cymru to Chepstow. The effort reaching the pass is rewarded with stunning views in this case enhanced by the weather. 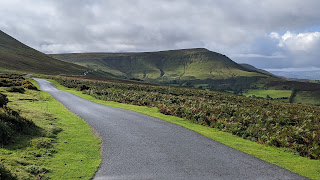 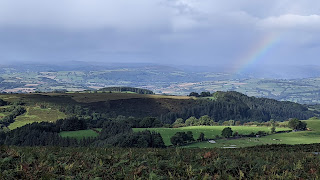 The descent was made more challenging riding directly into the sun in and out of the "black holes" in the tree cover under which was the worst road surface I encountered. There was an almost total lack of motor traffic down to Llanthony as the edge of the road has collapsed into the river and it has been officially closed since March. However farmers have to work so it isn't blocked and just as I approached the offending section a tractor roared across it towards me. It didn't fall into the abyss so I figured further collapse was unlikely. Coffee at Llantony Priory could not have been in better surroundings. 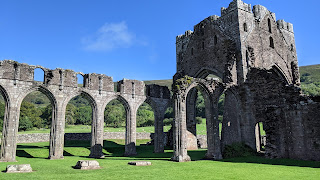 Now it was an easy ride down the valley before the long pull up over Campston Hill  to Grosmont and the "flat" way back through Herefordshire along the Golden Valley. Lunch had taken some careful planning with pubs doing food for mid week lunch being a rare breed but the Mill near Peterchurch sufficed. After this a final hill took me over to the Wye valley and a long meander back to Hay on country lanes. 65 miles and another 4600ft.

Any chance of making up for Tuesday on Thursday morning before driving home disappeared in the mist and rain. Still, Thursday is market day in Hay so an opportunity to shop for some local food goodies to bring home.

Looks beautiful Brian. I recall being blown off the road on the Gospel Pass

I too have happy memories of the Gospel Pass. Sheet ice.

Nice ride, Brian. You were in Gladwyn heartland, had you but known it. Lots of dead Gladwyns in Grosmont churchyard.