Thank you to the 15 or so riders who joined the B ride in glorious weather on Wednesday. And an extra thank you to Dave for getting us all off to a fine start at the top of Root Hill and to Clive for leading the second group, or was that the later, or shorter, or longer one? I think most of us have forgotten and probably never really cared too much.

John Austin led one group of Bs from Dorking Christian Centre to Root Hill for the annual freewheel competition. Fixie Dave was in the second group and soon after he arrived he pushed off and the competition was under way.

I went first and stopped opposite a large yellow vehicle. Mark soon rushed by my marker as did many others. A little later Sue Chasty and Marcus Phillips came by, almost level. Eventually they stopped, Sue travelling about one length further. The other Sue (Foster) was lady runner-up – this competition was in complete contrast to her recent marvellous performance in Scotland (see blog), Keith Rook was runner-up (male) – I remember when he used to win.

We gathered on the green at Brockham for prizegiving – again Ed had made a couple of unique wood carvings for the winners (Thanks Ed), and the runners-up received an inner tube – never know when it might be useful. I hope everyone enjoyed this annual diversion – I understand large tractors with large trailers were a problem for some – if it happens again you can always go back and try again.

Mother nature confounded the forecasters once again and the early cloud dispersed giving way to blue skies and sunshine by the time everyone arrived at St Martins church in Dorking.  The warm sunshine had its effect, and my group of Sue, Tony, Tim, Grant, Dave and Paul were very laid back and not concerned at all as we chatted, drank coffee and ate cake in the church cafe while the appointed departure time slipped by. We were still very relaxed 20 minutes later when we mounted our trusty steeds to make the journey to Root Hill. Even the prospect of intense competition to come could not crack the chilled nature of this group.

After making our way through Dorking High Street, then through Betchworth Park golf course we were soon cycling through England’s green and pleasant land. The divine countenance was certainly shining forth and illuminating Surrey’s pleasant pastures on this beautiful Autumn morning.

As we approached Root Hill, a chromatic spectrum of coloured cycling jerseys could be seen gathered at the summit – we were the last to arrive, but we weren’t bothered. 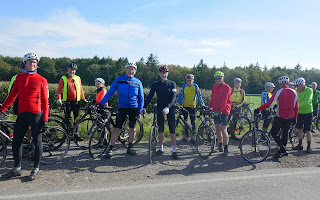 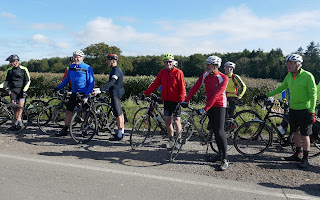 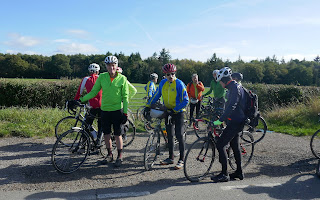 This breezy attitude clearly paid off and our group performed admirably in the racing with Sue Foster collecting the Womens runner-up prize; well done Sue.

After the racing, and the prize giving on the Green, we were the last group to set off for the short ride to the lunch stop at Henfold Lakes. 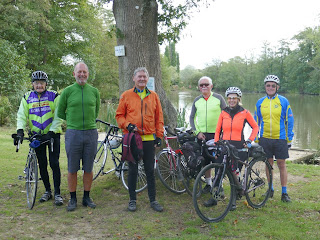 Soon after eating lunch the topic of conversation quickly turned to where we would stop for tea and cakes. You can see where the priorities of this group lie! It was decided that bicycle friendly Ginger & Charlie in Leatherhead would fit the bill nicely, so we made a bee line for Leatherhead. Only the south face of Punchbowl Lane stood in our way, but it was a piece of cake with tea and cake almost within touching distance.

Following a very enjoyable tea stop where the topics of conversation were wide ranging from how good the coffee was to climate change to the merits, or otherwise, of various  elevenses locations, I made the short journey home while others had further to go.