A group report, Weybridge to Pirbright

Three groups set off for Pirbright on what turned out to be a beautiful, Autumn day. My group led the way and we were going well until Dave F’s gear cable snapped. Step forward the man with a plan. It seems that Simon had read about the use of a stone, wedged into the derailleur would do the trick. Scrabbling around in the stony driveway of house Simon selected a stone, right size, size shape and with the cable strapped up and stone in place we were off again. We reached lunch with no further mishaps ( Dave wisely took the short route to the pub), well fed and watered most of the A’s met at the cafe/bakery in Cobham in good time.

Many thanks to Janice and Neil for sub leading and Simon for back marking my group and providing some ‘stone age’ knowledge. 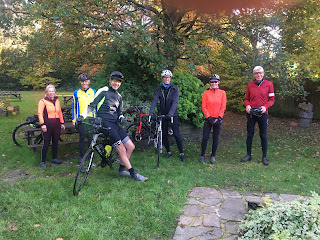 My group of Steve W, Mike R, Dave B, Patrick and myself were last off as I’d been told by Hans we’d be fast. I wasn’t sure if that was something we had to live up to or not! Unfortunately I’d been unable to recce the ride as rain had forced a late cancellation on the scheduled day so I was leading from a gpx file in a relatively unfamiliar area. Fortunately my garmin behaved well and I only needed my back seat drivers to shout out the odd turn instruction. Mike also had the route on his garmin and Dave had part reccie’d the ride on a different day (so in fact I probably wasn’t needed at all). With my eyes firmly on the garmin for route instructions it felt like hard work into a headwind. Nevertheless the sun, mild temperature and golden autumnal trees were a treat. We passed Neil W’s group and then Hans’ as Dave F had a gear cable problem. Despite the wind we made amazing time to Pirbright, indeed I’d hardly had time to digest my excellent bread pudding from the day centre. The reason became apparent as the route continued on with no sign of the Royal Oak. We had a loop and the biggest hill of the day to cycle first before arriving at the pub!By the time we arrived at the Royal Oak we found Dave already there as he had sensibly decided to miss the hill given his limited range of gears. We were more than ready for our lunch and it was quickly served to 3 of us, not so fast to 2. Great food though. We hadn’t decided where to stop for tea but Ripley came too soon so we headed for Cobham. In Cobham it was still very early so we decided to forgo tea and press on home. Thanks to Hans for a lovely route which we all enjoyed and to my group for their company and assistant navigating. The autumn colours and the sunshine were a bonus too. JaniceHi

Can we get Simon to demonstrate the stone trick ? Which sounds better than tiring up the inner cable !

Can we get Simon to demonstrate the stone trick ? which sounds better than tieing up the inner cable....