Reading Mark's blog 'An Autumn ride' spurred me on to write up my own autumn ride on the same day.

I met up with 2 of the ladies that I'd ridden the Chase the Sun event with. We'd all gone on to do our own thing in the intervening months and in the case of Shona, that was to do LEJOG in 9 days (the same LEJOG as Wayfarers own Sue F).

I was meeting Shona and Leila at the end of Walton Lane at 8.40 which meant a very cold and frosty 7.40am start from Epsom. This was colder than forecast the night before so I had to rapidly find an extra base layer, winter gloves, cap and my winter boots.

The plan was a ride into the Chilterns, just short of Princes Risborough and be back home not too late. That meant just one cafe stop and a couple of roadside re-fuelling stops.

As we met up it was bright and sunny although there was little warmth to be had in the sun. Off out over Chertsey Bridge on busy-ish roads and towards Windsor Great Park, our first road-side stop was soon after that and I was relieved to find out that I was not alone in feeling that the cold meant an early re-fuelling stop was essential. Too cold to linger for long we were soon back on the bikes and cycling through the picturesque Bray and arriving in Marlow, more than ready for a hot coffee and flapjack at the cafe in the park. We sat outside with the benefit of an outdoor heater which was lovely!

Back on the bikes, we had left the busy roads behind and on country lanes headed upwards towards Lane End and West Wycombe. Progress slowed down as we hit the hills of the Chilterns and indeed the hills came fast and furious, one tough climb after another. A couple of miles short of Princes Risborough we turned towards home and had a pitstop on a park bench to eat the sandwiches we were carrying. I don't think I could have managed another hill without that stop and we were all wondering why the ride felt so much harder than the summer rides that we had done. Possibly the energy sapping cold, our inability to access snacks whilst riding due to thick gloves, slightly less miles in our legs, lack of Vitamin D, all of the above? I could think of no more excuses!

Somewhere in the hills we took the only photo that we remembered to take for the day. 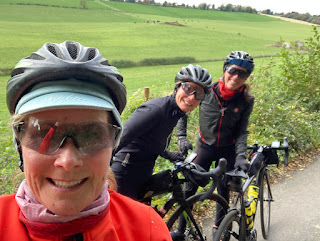 Heading on through Penn Street, Beaconsfield and Woburn we cycled through Burnham Beeches, the perfect time of year to do that and the autumnal colours had moved up a gear since the Wayfarers recent visit.

We'd left the hills behind, with some relief on my part, but the beautiful country roads became busier as we journeyed home through Eton, Datchet, Runnymede and then onto familiar roads home.

My Garmin had been playing up with a new fault as it kept switching itself off and by the time I got to Walton it refused to switch back on. Maybe like me it wasn't so keen on the wintery conditions! I got caught up in rush hour traffic and by the time I got home it was around 5ish and was fully dark. It really was a Winter's ride!

110 miles and over 4,000ft in all and we've agreed that's our last century ride this year. Although maybe we could switch to kilometres.....

Well impressive Janice, and so cold!

Fabulous ride Janice despite the wintery weather you encountered. And your report is a good read.

Maybe your Garmin didn’t like the cold - at least it wasn’t your Di2 playing-up. Great ride!