Nine set out from Cheam this week on a very chilly morning - still only about 4ºC as we met, most refreshing! Bright sunshine which became warmer over the day. We took our usual route through Claygate and Blackhills, arriving at Cobham shortly before 11, as the last of the B group were departing. Here we met Jane, Ed, Bill, Don, Caroline and Brian and enjoyed the comfort and warmth of our meet up in the RBL.

Refreshed and rested, we were about to depart when Ed spotted Tony d'Italia whizzing by. We shouted and he popped back for friendly greetings. Then we set off to make our way to lunch at Fetcham Bell.  Despite a detour through Bookham we arrived a little early but this was just as well as our leader had only booked lunch for eight, so they had to find an extra table for us at 15! But were cheerful and welcoming and our food was served to all of us at once about 40 minutes later, very good service and generally all pleased with our lunch. 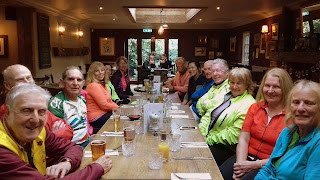 We left shortly before 2 pm to head back via Leatherhead to the Old Moat for tea. But dark clouds were looming as we approached Ashtead and the commons, so it seemed wiser to make for home. We took the most direct route via Evelyn Way and Manor Green Road. In the event, the worst clouds had passed us by as we got to Ewell, but I was still quite glad to get home shortly after 3.15! 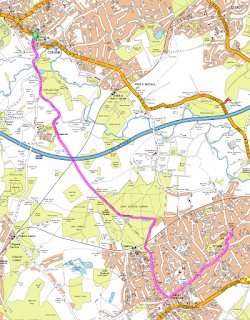