After completing three recces in the dry, with some sunshine too, and with a still-clean bike, I was hopeful that we could have enjoyed the kind of dry day the Met Office promised, but alas it was damp almost all day, and definitely wet under-wheel.

Nineteen signed up and we were 16 on the road in three groups. I hope all who did not start with us are ok.

Mindful of the scarcity of daylight, my main concern was to get everyone round the course and home before dark. So my first group set off just after 10.30 with the following, and doubtless faster groups at 10 min intervals.

Early on we passed the former home of Herbert Hoover (famed for the eponymous dam, not the vacuum cleaner) who worked in London as a mining engineer and developer before WW1.

There was drizzle almost everywhere, and especially on my glasses, so I missed a turn until gradually becoming aware of distressing beeps from my Garmin. In the process we briefly lost touch with the Back Marker, sorry Dave.

On the relatively un-Muddy Lane one of our riders fell at the derelict kissing gate, which requires a tricky turn with various concrete obstacles to avoid. After pausing to assess damage, we concluded thankfully no injury to man or machine. The way these obstructions are placed suggests that the great Muddy Lane War is not over yet.

Not much to see until we arrived at lunch, shortly after the faster groups. The Half Moon has a generally up-market appearance with prices to match, but describes itself as a former coaching inn, so should be used to guests arriving in all conditions. And so it proved, everyone was friendly and service coped well. We were the last group to leave, but only about 15 minutes later than I had planned. 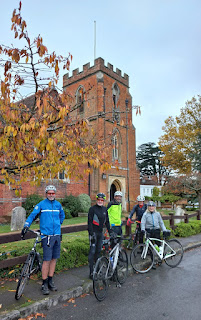 Slightly drier in the afternoon, and we made good progress until meeting Neil’s group, where Brian was wrestling 4-Seasons onto Mavic, never an easy task. My commiserations to Brian, and I hope the struggle didn’t spoil your day. 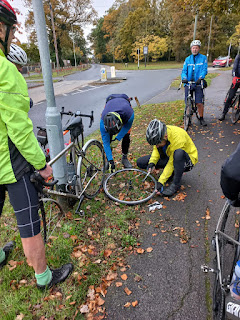 Unable to offer much help other than record the event on camera (thanks Simon) we continued to Walton where we decided we were damp enough to deserve treating ourselves to tea at the Riverhouse Barn café.

Thanks to my group, Gina, Clive, Simon and PeteB for being unfailingly cheerful throughout, and especially DaveW for back marking and knowing the route better than me.

Next off was Neil’s group.

It was good to be back at the friendly Hersham Day Centre. After one late drop-out it was Ged, Brian, Dave F, Patrick and I that set off into the increasing drizzle. Dave's route had us on plenty of quiet roads and the off-road sections were generally firm.

There were plenty of autumn colours around but rained-up glasses made it a day for pushing on. At the gate on Muddy Lane we passed Dave's group who were recovering from their "incident", and so we were now the first group on the road. More quiet lanes were traversed and then we arrived at The Half Moon in Windlesham.

We were shown through to one large table set for eighteen, with glasses and cloth napkins. They were obvious expecting some posh people. We sat down and promptly started dripping all over the floor! The other two groups soon arrived. Our drinks and food came quickly and it was good to see us all together like it used to be in the before times. 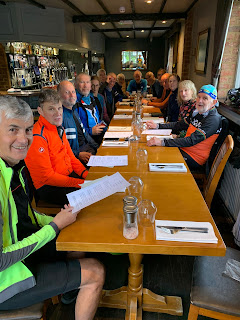 By the time we left the rain had stopped and so Ged took a photo outside the pub and we started our return journey in much better conditions. 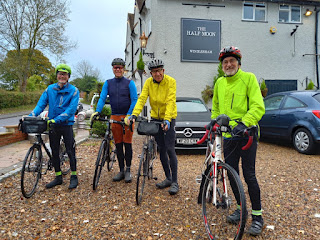 There were more quiet lanes and autumn colours but while by-passing Addlestone we were brought to a halt. Brian's front tyre was flat and he felt a new tube would improve matters. I didn't see all the action but it involved all three groups and by the time we were on the move again we had changed from being the first group on the road to the last group.

Thus with the increasing rain and gloom we all agreed to forego tea and push on for home.

Thanks Dave for a well-planned route and a welcoming new pub for us. I think we all enjoyed it.

Our group of 5 riders (Janice, Fiona, Hans, Neil W and myself) set off from Hersham in persistent drizzle that ended up accompanying us for pretty much the whole ride to Windlesham. A mixture of some familiar roads and some that were new to all of us made for an enjoyable route in spite of the conditions. A very nice lunch and decent service from a venue that I suspect is not used to dealing with large groups of cyclists, and we were soon on our way back. 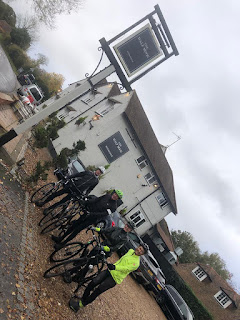 The first half of the route back was dry and we made good time before the rain eventually came back again, just after we had briefly stopped in Row Town to see if Brian needed any help fixing his puncture……unfortunately, all we could offer were some smart-ass comments!!!

Hans headed for home from Walton, and Fiona and Janice pushed straight on from tea, while Neil and myself had very nice cakes with our tea at the cricket club in East Molesey. There were no signs of any of the other riders by the time that I left…as I later found out, they had either ridden straight on or stopped for tea in Walton.

A nice ride with some lovely autumnal colours, in less than lovely conditions and back home by 4pm….not such a bad day out after all.

Finally thanks to my co-leaders for your patience on a murky day; you did a lot to make it an enjoyable experience. One lesson learned; I should have put out a message on WhatsApp or whatever to say we had changed tea plans. Then we might have had more people to tea together.