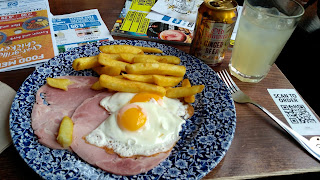 The North Downs have not featured at all in the last few Wednesday 'A' rides and I was worried we might be gettting withdrawal symptoms, so, with the help of Brian and Steve Duffin, I came up with a route taking us up Bagden Hill, then up Little Switzerland, then up Hurst lane, all in quick succession, then, after a generous, flattish interlude of at least a couple of miles, up and down a few short, sharp bumps between Kingswood and Merstham, with the tempting reward of a lavish lunch at Wetherspoons, Redhill.  The plan for the afternoon was much more reasonable, with a flattish ride over Reigate Heath to Betchworth, then a quick shimmy through 'the gap' to tea at Leatherhead. 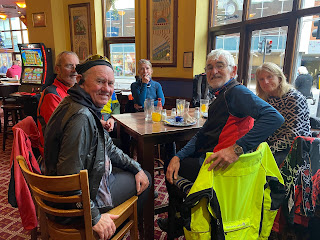 The morning was at least a little bit bright (at times), and twenty 'A' riders gathered for a rather cold start.   The Edmund Tylney did good trade!   My group set off last at 10.40 am and reached lunch without incident.   After savouring the delicacies on offer at Wetherspoons and boggling over the prices, we were met with stygian gloom for the ride back to Leatherhead.   It was lights on from 2.00 pm!    Still, at least we can say we saw The Sun!    No one from my group stopped for tea and we all disappeared homewards through the gloom!
This report from Steve Duffin: 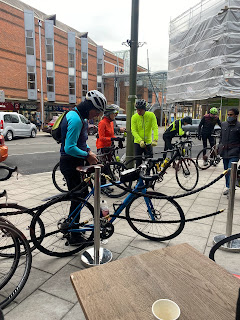 One of the big advantages of co-leading rides is that occasionally, when you do a recce of the route, you ride in glorious sunshine. Such was this route which covered many roads we have peddled along before, but put together in a way that impresses unforgettable vistas. Unfortunately we set off in cold, grey gloom today at 10.25 am. Janice, Mike, Hans, Patrick, Neil W and myself in the first group. Well the roads were quiet and we made good time, arriving at Weatherspoons Redhill at 12 pm. I had Ham, eggs and chips and a ginger beer for £3.99 ? Why can't all pubs produce value like this? 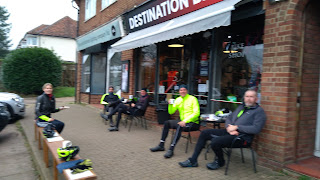 Suitably refreshed we set off again at 12.55 pm and because they were all fast riders we reached the A24 cycle path to Leatherhead at 1.30 pm. We had a discussion about where to have tea and Destination Bike was chosen unanimously because of the excellent coffee. However it meant climbing Box Hill. I suppose it was fitting punishment for not going fast enough. While we were there we could ogle the latest Willier carbon gravel bike. A single 40 tooth chainwheel, driving a 44 to 9 tooth Campagnolo twelve speed cassette. The whole bike was about 8 kg with 45mm Panracer tubeless Gravelking tyres. Wow!
Back to earth! Thanks to my fellow riders for their company on a cold day out. Thank you Dave Ward for another intriguing route. (Too kind, I'm sure - Ed)    If only we could have seen it in warm sunshine like the recce!
This report from Simon Lambourn: 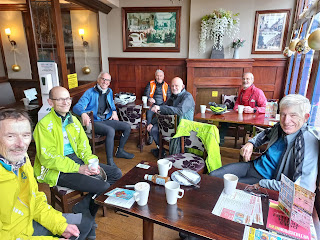 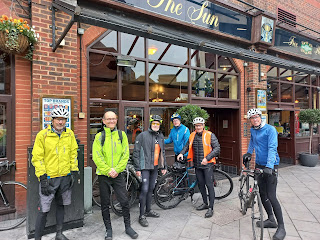 David's ride today had everything - hills, bracing weather, rarely-ridden roads, more hills, and a nice pub.  Our group's pre-ride preparation was carried out in Wetherspoons at Leatherhead, attracting several people from the other groups too.  It was around 2 degrees C when we set off, but we soon warmed up on the hills, first up to Bagden hill and then Little Switzerland and Walton on the Hill.   As we were approaching Walton on the Hill we sighted a colourful group of cyclists ahead.   Gleefully, we thought we had caught up with the first A group, but when we eventually caught them we realised it was one of the B groups, also enjoying the climb up to Walton.   After a tour round the quiet foothills of Mugswell we arrived at lunch at the Sun, Redhill, also a Wetherspoons pub.  There was talk of making it a three-Wetherspoons day by having tea back at The Edmund Tylney at Leatherhead (would this be a record for the Wayfarers??) but in the end we were tempted by the cakes at Charlie and Ginger instead.   A nice day out in good company.  Thank you to Dave Bartholomew for back-marking, and to David W for a most enjoyable and invigorating route.
Many thanks to Simon, Steve and Brian for their help, and to everyone else for your company.