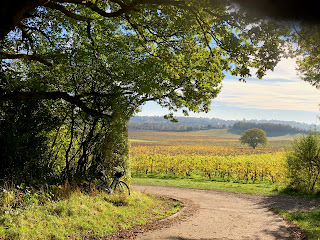 Yesterday was a very pleasant day, so I decided to meander through the Surrey Hills.  I took the train to Box Hill and West Humble, rode up the lane to the old chapel and then took the bridleway across to Denbies.  Lovely views, and a very good start to the day.

Here I picked up the Leith Hill Greenway, and rode through the autumnal vineyard towards the Coach Road. Sunny, calm, no-one much about. I met a lady with her dog on the bridleway and she wanted to know how far the track went.  'Shere', I told her, 'and further if you like'.  She seemed amused and correctly guessed that I was going further than this. 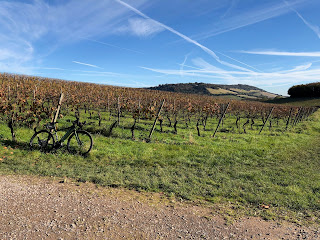 Through the archway under the Ranmore Road, and on along the Greenway.  This is a very scenic section, and it was very pleasing to see that the entire Greenway was golden with fallen leaves in several places. 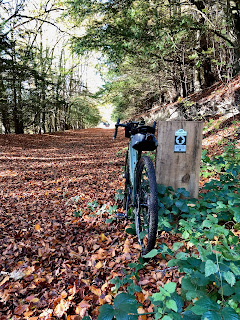 The surface underneath is good, so it was easy enough to ride on the rustling carpet.
Just before Westcott I picked up the NCN22, known to many Wayfarers, rode along to the Whitedown road and crossed over to Raikes Lane, as we usually do when we are coming down this way.  By the Volunteer I turned on to Water Lane, leaving it before the climb to Abinger Hatch to turn right and climb up past the farm to the Youth Hostel.  We never go this way, as it's a dead end, unless you're prepared to ride the Fire Road through Hurtwood.  I was, and it has a very good gravel surface up to the viewpoint at Holmbury Hill, which I think has some of the best views in Surrey. 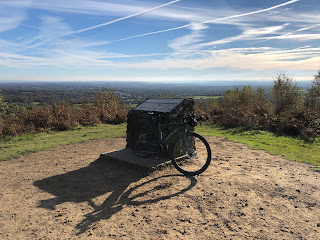 There were some walkers here, the first people I had seen for a while, but it's generally a pretty quiet spot.
Down from here past the Cricket Club - Holmbury and Coldharbour each have charming cricket grounds in the woods - then down the hill on the road for about half a mile until turning off on the bridleway through Upfolds Farm.  This is a bit of a mixed blessing.  It joins you handily to Leith Hill, but it's quite steep, and horses use some of it.  You can hardly complain about this, as it is a bridleway, but horses can make quite a mess of a trackway unless the surface is hard.  This wasn't too bad, but it was the hardest part of the ride.
Across the Leith Hill road at Starveall, and up to the top, now a popular A Group destination. 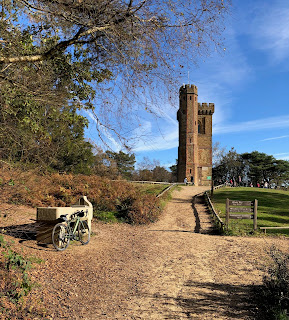 I went over the top, down the other side by the little cut-back that I found in the Spring, then over to Coldharbour Cricket Ground.  The trackway here is prone to large puddles at this time of the year, so I rode along side it on a benign part of 'Summer Lightning', a mountain bike trail.  This has a good, dry surface and I was able to rejoin the track just before the Cricket Ground.
Steeply, but easily, down from here on gravel, then across the road to The Plough, now a very smart little hotel and brewery.  I put my bike in the yard and had a jolly good lunch. 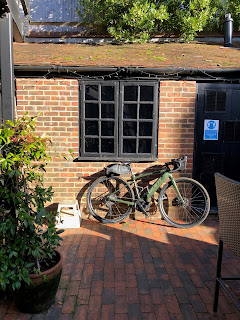 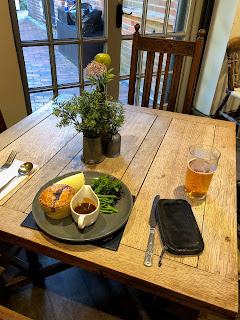 After lunch, down Anstie Lane and Moorhurst Lane to Holmwood Station.  The first part of Moorhurst Lane is a bit rough, but it soon smooths out, and most of it is surfaced. 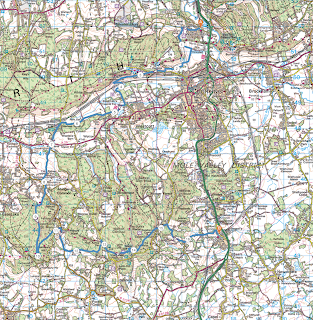 Here's the route - I've put it on an OS Map, which seems appropriate.  Gpx available, if anyone wants it, but you might just as well plot your own.
The bike was the Jolly Green Giant, and it is very well equipped for this kind of thing - big tyres (45mm), big brakes and a big engine.  But the ride isn't hard, and most surfaces are good, so you could easily do it on anything sturdy, particularly if you were prepared to walk a bit.  A mountain bike would laugh at it.
The charm of these rides, for me, is lovely scenery, quiet routes (even in one of the most densely populated parts of the country), and no traffic at all.
That has to be worth something.
Mark

That's sounds a lovely route Mark. I ve walked bits of it...over Leith Holmbury and down to Peaslake. I remember picking up loads of sweet chestnuts on the top of Holmbury.

Thanks Mark. Looks like a great ride. I'd appreciate a gpx if that's ok with you. I have OS on my garmin so it should be easy to follow.