Two groups of riders led by Dave Fixie and myself left Bocketts Farm cafe on a cold but dry morning.

We were heading for The Cricketers Inn in Epsom, via Walton on the Hill, Chipstead and Banstead, 19miles to lunch. En route we paid our respects at the plaque of Emily Davison the suffragette killed at the Epsom Derby. Arriving at The Cricketers we were seated in an upstairs room reserved for us, the service was very good and the food good at a reasonable prices. Nine of us continued in one group to afternoon tea.

We found the cafe at Hampton Court Palace closed to non-ticket holders so onto Plan B, tea at The Pheasantry.

Thanks to Dave for leading the first group and Martin for backing marking for my group.

It was a chlly ride down to Elevenses for all of us. But the fog has a special atmosphere when imposed on the autumn scenery and those of us who turned left off Hawk's Hill by the Elmer Water Works, and rode down the leafy Bocketts Lane path to the farm, were able to enjoy its full splendour and could almost imagine the sun coming out later in the day.

It wasn't quite the expected team of riders who turned up but we were pleased that Clive brought his son George along for a taste of early retirement. Fortunately for him Tony had produced a good route and with Dave on his trusty fixed-wheel bike our group headed out first after coffee and cake in the barn. We descended Young Street and took Highlands Road out of Leatherhead for an excursion we rarely make, through Tyrell's Wood to Headley. Then Walton on the Hill, Kingswood, Chipstead and Rectory Lane brought us up to Woodmansterne for a flatter and faster ride through Banstead and Epsom Downs and we soon arrived at The Cricketers. As far as I was aware we all ate very well and the pub had a nice toasty ambience.

After lunch most gathered for team photos before they united as a single peloton and headed off through Chessington and Long Ditton to Hampton Court for Tea. However it seems that nowadays we can't visit the Tiltyard Café without tickets and the group also found that they couldn't wheel their bikes through the palace premises as we used to be able to do. So, forlorn and tealess, they employed a plan B which was to go to The Pheasantry in Bushy Park where satisfaction was had. 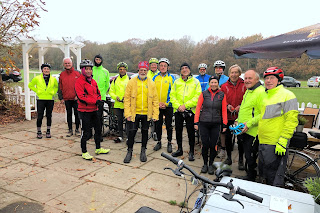 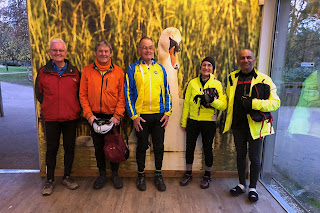 Thanks to Tony for coming up with and leading a very good ride and to Dave for leading our group, finally making sense of the disagreement between his Garmin and Strava about where Tony was intending to take us. 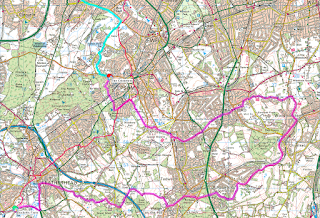