Report for B Group - 10th November

The Hersham Day Centre was warm and dry, so it was a challenge for the first group (Arwyn, Paula, John, Tim, Richard and me) to head off into the drizzle.  However, once on the road the ride went well.  Tim had shrewdly recommended a diversion to avoid the floods in Plough Lane, which some of us had braved last week and which was still under water, so although the ride was definitely ‘damp’, our feet remained more or less dry.

Having climbed Staple Lane - the main hill challenge - we paused to admire the view (or what we could see of it).

Then it was downhill towards lunch at the Duke of Wellington.  However, shortly before we got there Paula’s rear tyre punctured and she had to push the last few hundred yards before replacing the tube in the pub garden. Note the rest of us giving encouragement and moral support as she laboured - though I should record that John undertook the arduous task of pumping up the repaired tyre!

Lunch had been pre-ordered, which meant it arrived quickly - very welcome as we were outside and although the drizzle had lifted (temporarily) the sun declined to emerge.  So we were soon on our way.  But - alas - the puncture gods struck again, this time to Arwyn! 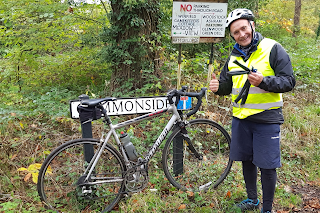 Fortunately that was the last of our mishaps and the rest of the ride was smooth:

Thanks to Tim for designing a good route through some lovely autumn scenery, and thanks to all in the group for their good spirits and excellent company.

We were happy to be able to meet again in the Hersham Day Centre for the first time since Pam's ride to Woking on 15th January last year. In the olden days yesterday would have been the date for our AGM but everyone resisted the urge to wander around to the church hall after Elevenses, much preferring to venture out into the drizzle and head for the hills. One pleasant surprise for us was seeing Robert Tolley at Elevenses on what is to be just a very brief visit from Canada. We were pleased that he could join us.

B Group had a good turnout with 22 of us in three teams, the 'Leg Warmers' led by Stephen, the 'Thermal Socks' led by Martin, leaving me to lead the 'Neck Warmers'.

The route to Cobham on unpleasantly busy main roads was greatly improved by a detour through Whiteley Village and the Convent Lane past the Notre Dame Schools. Even in the drizzle, the brief but grand parade through the parkland of North Avenue and into the heart of Whiteley Village is an uplifting experience, though apparently shortlived for Martin and his team, the Thermal Socks, who received abuse by a resident motorist as they cycled around the octagon; perhaps she was anxious that they were going to go on a rampage and do wheelies in the flower beds or do some fly-tipping. The driver had veered towards the wrong side of the road and Martin had to take evasive action to avoid being hit. The signs prohibiting cyclists (and runners and walkers) which were posted at the North gate during the height of the pandemic have all been removed.

Thanks to intelligence received the day before and the experience of Pete's aquatic team last Wednesday we agreed to avoid the persistent floodwater in Plough Lane by going around through Downside. At East Clandon we stopped to confirm that the few of us in the Neck Warmers team who were not keen on the climb up Staple Lane should head East along the A246 directly to the Duke of Wellington. The rest of us got to enjoy the misty atmosphere across the hills on the way up and the damp autumnal beauty of the trees on the way down Green Dene.

We had pre-ordered our lunches which were delivered to us by Siân's team of hard-working and cheerful staff. As far as I am aware we all enjoyed a very tastly lunch. I did have some misgivings when I was first told that we would be seated outside under canvas but, whatever else it was, yesterday wasn't very cold and we were kept warm by the patio heaters. 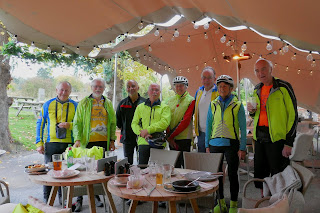 By 2 p.m. all three groups had departed. Not everyone wanted to take the 'scenic route' after Effingham Junction where they peeled off to head for home. For the rest of us it was a tranquil and not too perilous ride along Bank's Lane and through the Bookham Commons, a route which many of us rode for the first time on Paul's ride last December.

We emerged from the trees for a pleasant meander through leafy Fetcham, and beyond Leatherhead Station we were soon riding one of our favourite paths across the tops of Ashtead and Epsom Commons, marvelling at how well-maintained it is, and were in good time to enjoy our cakey refreshments (with several Leg Warmers and Thermal Socks) at The Old Moat before venturing out into the dark for the ride home.

A big thank you to Stephen and Martin who are now well established in the team of B Group leaders. Thanks to all 19 passengers who came to enjoy the ride. And thank you to Colin for being our back-marker and keeping an eye on us. 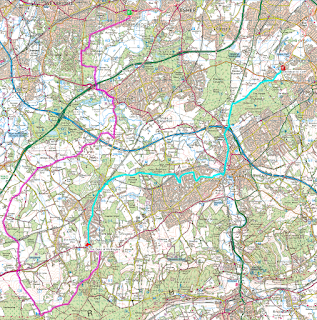