We weren't able to recce the ride from Weybridge, so I did a virtual recce on google street view. I noticed several places with Fox in the name, so I invited the group to look out for them. The 70s pop song 'Fox on the Run' came to mind, the others in the group recognised it. But who was the band?

Richard rode bare legged, and his verdict later was it was a bit chilly for that. But the sun did shine all day, making the autumnal colours vivid along Stonehill Road, then many other excellent roads like it.

There were three foxes viewable along Stonehill Road, one of them was new to me - a pub-like sign outside Foxholes country spa/gym. Steve noticed Fox Hills lane near Ash Vale.

Lunch at the Royal Oak went well. John related curious gems from his trip to Istanbul. Neil C shared what he knew about the Turkey: in Portugal they call it the Peru bird. John set a fair pace at lunch and it was Neil C left lagging with his remaining chips. Even so somehow John was delayed and sorry John you missed the group photo taken out front. 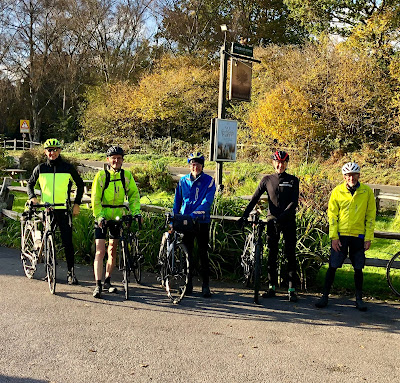 Neil C was hesitant to admit he remembered this, but he thought the band was probably Sweet. (Correct, they who gave us 70s prose like 'Wig-wam bam sham-a-lam" and "Ho-chi-ka-ka-ho, Co-Co").

Onward, some were flagging a bit so we paused at the Fox Inn, FOX'S CORNER. . 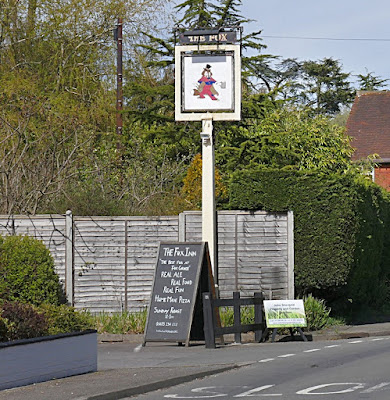 Then we arrived early at Cobham so plenty of time for a drink and cake.

A lovely day out, thanks Hans, and Dave V. for backmarking.

Late addition:  Neil C: "I'd like to claim another point for the real live fox that ran towards me in Lower Marsh Lane on my way home yesterday". That's a deserved bonus point!